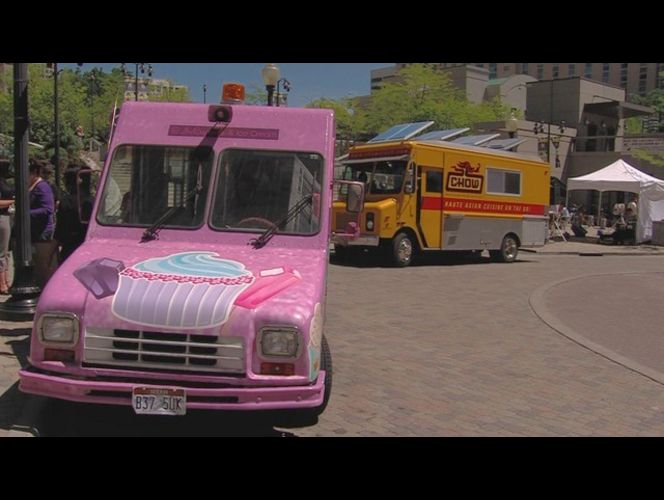 SALT LAKE CITY — They roll downtown once a week, serve hundreds of people willing to stand in line for a tasty lunch, then leave with the promise of returning next Thursday.

These are the food trucks — mobile restaurants that city officials say draw people downtown and stir up business.

But some owners of brick-and-mortar restaurants say the trucks take a bite out of their bottom line.

“I didn’t expect to serve 120 people,” said Guy Behunin, who, together with his wife, run a food truck featuring grilled cheese sandwiches.

People come from all over to eat at the food trucks on Thursdays. But when they’re eating outside in the sunshine at Gallivan Plaza, it means they’re not in the restaurants nearby, like the Judge Café and Grill.

“Lunch is really the core of this business,” said Royal Tyler, owner of Judge Grill and Café.

He says when the trucks pull up, they bite into his profits.

“I looked at the last four and they’re down between 17 and 30 percent,” he said of a month’s worth of Thursday lunchtime receipts. “If I can’t make it up some other way that means, you know, I have to go out of business.”

While they pay top dollar for prime real estate, the trucks get to move in without many of the expenses and fees they pay, paying for nothing but a business license to park and serve.

“We do understand their concerns. We do understand that they’ve expressed a disappointment in what they feel is maybe a negative impact to customer flow on Thursdays,” said Art Raymond, deputy director of communications for Salt Lake City Mayor Ralph Becker. “Our goal is to find an environment downtown that really works for everybody.”

Part of that includes events like Food Truck Thursdays.

The city says when more people come downtown, they start seeing and experiencing other restaurants. That could translate into more business for everyone.

“We do feel very confident that that tide will raise all ships,” Raymond said.

He serves a salad bar, sandwiches and smoothies on the same street as the food trucks. He said managers first thought the trucks would drive away customers, but it’s actually increased their traffic.

“It brings people down here that normally wouldn’t be down here to actually see that we are here,” Doyle said, and that brings in more people other days of the week.

Whether business will grow for Tyler and other restaurant owners remains to be seen.

“We’re still working on it,” Raymond said. “It’s a solution we would like to see in partnership with all of our downtown businesses.”