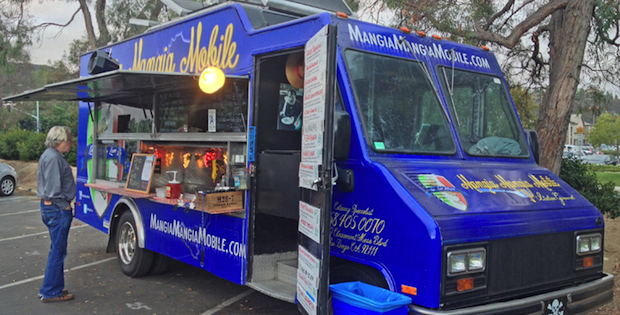 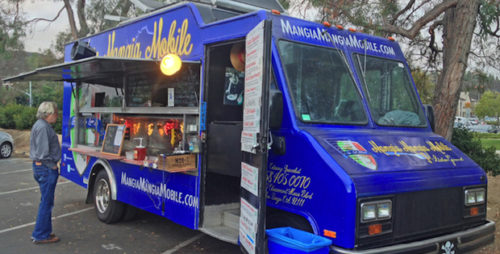 City staff have proposed regulating the food trucks’ proximity to restaurants, limiting their hours of operation and a creating a permit system for both property owners and food truck operators.

“This is just the beginning of a process,” said senior planner Amanda Lee.

With direction from committee members, city staff will reach out to stakeholders to gather input on the best way to craft the regulations. A set of proposed regulations likely will not be available until January, and they likely will not be finally approved by the full City Council until March 2014.

In the mean time, food truck owners have to just hope that they can make it through the winter.

“Food truck operators right now are in limbo,” said Chris Duggan of the California Restaurant Association, which represents both brick-and-mortar restaurant owners and food truck operators. “They don’t know where they can operate and when. Let’s move this through the process as fast as possible.” 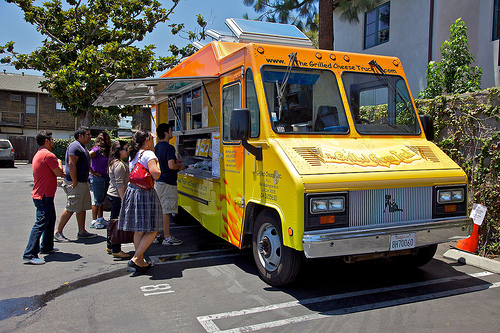 Mission Valley’s big weekly food truck event was canceled in order to avoid a citation from the city, but many food truck events have gone on undisturbed because the city’s Code Enforcement only responds when a complaint is made. Even then, food truck complaints are a relatively low priority, said Mike Richmond, a senior zoning investigator.

“Our staffing levels are such that we have our hands full with much more serious health and safety matters,” Richmond said.

San Diego has 250 mobile food vendors that generate $38 million a year in economic activity throughout the San Diego region, according to an analysis by San Diego State University researchers.

Many of those vendors are members of the United Association of Food Trucks San Diego, which mostly represents Latino seafood truck owners.

Many brick-and-mortar restaurateurs do not feel the food truck owners are sharing equally in the burden, however.

The current situation is not a level playing ground for all businesses, said Jack Gambrell, who owns Sixth Avenue Bistro.

“With my downtown redevelopment fees that I’ve paid for 40 years, these areas are now prominent and flourishing,” Gambrell said. “If they’re going to take advantage of what we as owner and operators have developed, then they need to come up to the table and pay the fees and all the expenses that it took to get to this.”

Food truck operators should also have to comply with other costly measures, such as the Americans with Disabilities Act, he said.

Another issue to consider is that the city needs to be more careful about allowing food truck events that take up metered parking spaces, said Gary Smith, president of the San Diego Downtown Residents Group.

A group of food trucks secured a city permit for an event just outside the Gaslamp District, Smith said. This allows them to close down a portion of the street that has parking meters.

“The city is losing hundreds or thousands of dollars in meter revenues because that permit was issued for an entire year,” Smith said. “It’s unbelievable how much money the city is losing because of that.”

Christian Murcia, who runs a food truck event booking service called Curbside Bites, took issue with the idea of limiting a food truck’s proximity to a restaurant, at least on public streets.

“We’ve found that time and time again in California, any sort of proximity rule to restaurants or limiting hours of operations, unless it pertains to public health and public safety – it’s unconstitutional,” Murcia said. “Every city that’s tried to enact restrictions like this has been turned down.”

If restaurants do not want food trucks to park on the street in front of their building, the city should make it as easy as possible for food trucks to operate on private property, Murcia said.

City Councilmember Lorie Zapf, who chairs the committee, said she wants city staff to fully vet whatever proposal they come up with to ensure it is as fair as possible.

The Land Use and Housing Committee and the Planning Commission expect to take further action on the food truck regulation issue at their first meetings, respectively, of 2014.