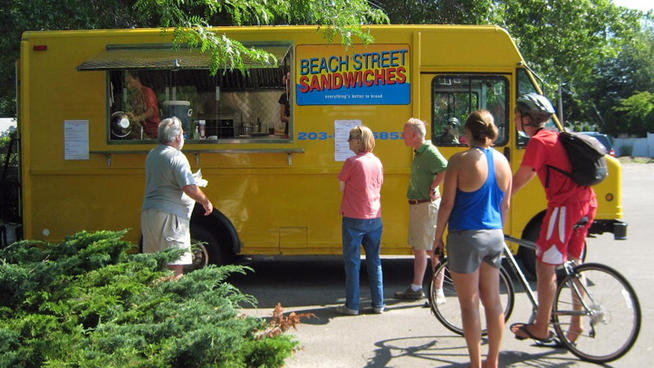 Food trucks made a brief appearance in downtown San Diego last month, only to be told to leave two days after their arrival.

In an attempt to start a twice-a-week food truck gathering, four trucks planned to assemble twice a week during peak lunch hours in the nucleus of downtown: across from the Civic Center. The small group of trucks was able to park in an ACE parking lot on May 23 and 25 for a flat fee of $50 per truck.

But on the second day the City of San Diego told the trucks they had to drive away.

Downtown workers (including the NBCSanDiego staff) are typically limited to the speedy options of a nearby Chipotle, various fast food chains and Horton Plaza food court. Food trucks could have provided a rotating alternative to the norm.

“We’re just trying to provide an area for these markets that are under served,” said Christian Murcia, owner of food truck company Crepes Bonaparte that participated in the short-lived group.

The city told the food trucks they had to leave after the Neighborhood Code Compliance received an anonymous complaint, and Murcia said no specifics were given why they had to go.

But the food trucks are working to get back downtown soon, and Murcia has upcoming meetings with city officials to resolve any issues that were presented.

“It’s kind of a gray area in the code,” Murcia said.

It’s true—there’s nothing in San Diego’s municipal code specifically regarding food trucks or mobile vendors. There are specific regulations for catering vehicles, but nothing so far for the increasingly popular mobile eateries on private property.

“It’s not so much the city was shutting us down because we did anything wrong, or [the city] did anything,” Murcia said. “It’s operating in a way that the city isn’t ready for us.”

He’s hoping to protect the restaurants in the area, in addition to reaching an equitable solution for the trucks.

Murcia is also hoping some city legislation will be introduced and passed later this summer to clear things up for the food trucks with more specific language.

In the meantime, downtown workers will just have to wait for a gourmet meal on the go.