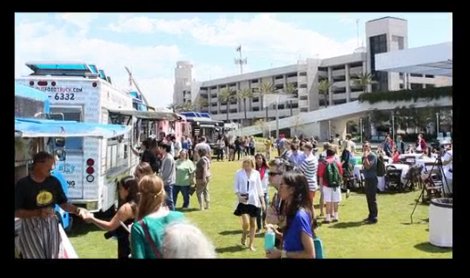 Taste, pricing, and proximity: a triple threat when it comes to deciding where and what to eat.

While California is famous for its In-N-Out Burger, and its carne asada friend from El Chilé right here in San Diego, most of the options around downtown San Diego have proven to be rather limited for those attending the JEA NSPA conference because of distance and pricing.

“We’re just hungry. The food options are very limited. I’d like something similar to cafeteria food, [like] chain restaurants or things in a mall,” junior Mutahana Swens from Marist Century High School in Chicago, Illinois said.

“I’m looking for a variety of food, something like Mcdonalds,” he said.

For students like Swens and Helckey, the famous California food trucks are an answer to their prayers.

Flashback to 1930s Los Angeles: A city about two hours outside of San Diego.

LA food trucks were born during a time of hardship for restaurants that couldn’t afford million dollar investments, according to an article on the Smithsonian Magazine.

Since then, food trucks have been growing in popularity all around the United States.

“We have so many food trucks. A huge part of our population eats at food trucks, so I think it’s really cool, and it exposes kids who maybe aren’t form a big area with food trucks to have that experience for the first time. I think it’s awesome,” the adviser for the Featherduster newspaper in Westlake, Texas Cindy Todd said.

The experience has proven to be positive for most convention attendees, even those with dietary restrictions.

“One of my students and myself are gluten free so it’s tricky for us. No matter where we go, we have to deal with that but we’re in Southern California and it’s very gluten free friendly,” Todd said.

Even those with strict food restrictions have been able to find various options through the meals on wheels.

Senior Ally Krupinsky of Century High School in Bismark, North Dakota has an adviser that has a strict gluten and sugar free diet. So far, finding food gluten free food hasn’t been a problem.

“I always love the food in big cities since we don’t have many options in Bismark, “ Krupinsky said.

Not only are some of the food trucks gluten free friendly, but they have also provided an exciting new experience for students such as Mike Ebert from Francis Howell North High School in St Charles, Missouri

“There are no food trucks in Missouri. This is actually the first time I’ve seen food trucks before. I think they’re pretty convenient. They’re set up pretty nice. I don’t think they’re too expensive so that beats going to a restaurant,” Ebert said.

The atmosphere in which the food trucks are located also appeals to many students.

Laura McCarthy from Shawnee Mission South High School in Overland Park, Kansas claims that the food trucks provide a “relaxed, chill vibe” for those who choose to take advantage of them.

“I like how it’s just like they can slide right up and you just walk to them and order, I think that’s cool. I guess it depends on what experience I’m trying to go for. I like the food trucks if it’s nice [outside], but if it’s bad weather then in a restaurant,” she said.

“[They’re] very convenient. With the tables set up, it’s a nice scenery to eat [so you] don’t have to stay indoors on such a nice day,” Ebert said.

With budgets, time crunches, and hungry journalists to impress, food trucks were able to serve guests and those near the Hilton San Diego Bayfront.

The food trucks will be back on the first floor park area from 11 a.m to 4 p.m. tomorrow.