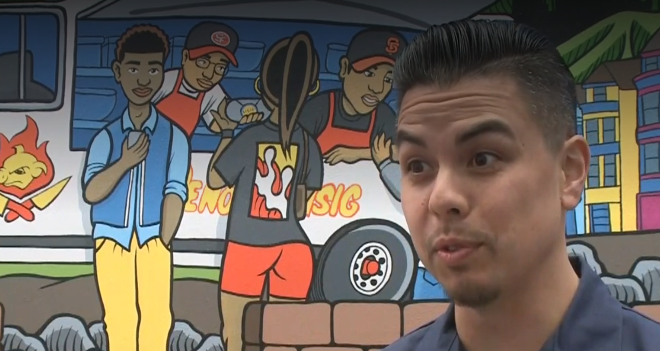 The line of customers stretched down Valencia and around 21st before the doors to the restaurant opened at 11 a.m. From outside, you could smell the familiar scents that have made this cuisine a favorite among San Franciscans.

Over the last nine years, six of their food trucks have been scattered across the city, making it a lunch and dinner staple.

“Going into the food truck was a little less risky, so at that point we’re doing something no one really heard of, which was Filipino-Mexican fusion,” explained Señor Sisig CEO Evan Kidera.

Kidera said the success of their food trucks is partially what gave them the confidence to open a more permanent fixture — despite now being committed to a lease and paying rent — especially when so many small business have been forced out due to increasing rents.

“We were really sensitive about finding a space that fit our brand, our experience and our culture. And not until we found this spot that we feel right about it,” Kidera said.

The owners hope the 800-square-foot space on 990 Valencia will become an elevated Señor Sisig experience. It took them five years to find this spot.

As a San Francisco native, Kidera wanted to make sure his local roots were highlighted here, which is evident by a colorful mural on the back patio, painted by local artist Aaron Kai.