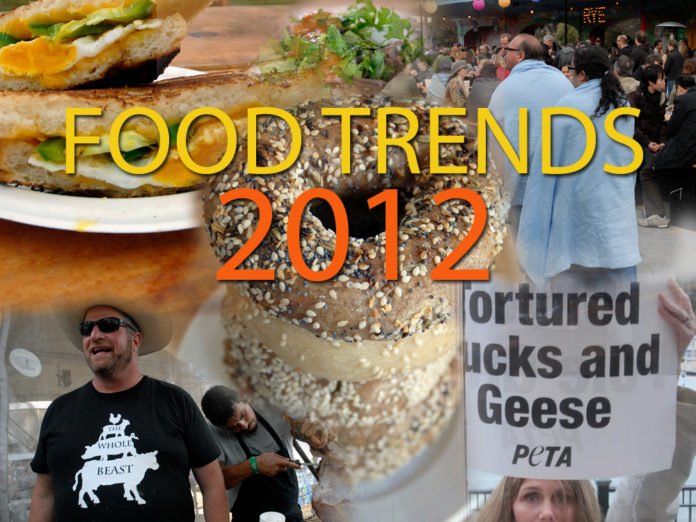 Delicious, or disgusting? The top food stories and trends of this year offered plenty of both. While the rest of the country worried about pink slime and contaminated peanuts, and dealt with the fallout of a devastating drought and a stalled farm bill, San Francisco debated its upcoming bans of foie gras and plastic shopping bags.

This was the year that big money and the usually New York-centric food media finally started to notice that our local food scene is no longer just figs on a plate or (humanely-raised) tripe in a bowl if, really, it ever was, for those of us who live and eat here every day. A few of our local stars decamped for the Big Apple. Big music festivals found that concert-goers now come as much for the food and drink as for the headliners, while at other food-centric street festivals, standing in line for tacos, dumplings, or huaraches was the main event.

Coconut water and kale chips went from trendy to kiddie, and doughnuts (and bagels) became the new cupcakes, at least in the East Bay, where everyone, it seemed, opened a bakery this year. So here, looking back on a year’s worth of columns from NPR, Bay Area Bites, and the rest of the media from the Bay Area and beyond, some reflections on what went right (and wrong) in food in 2012.

Don’t They Have Chinese Food in New York City?
What do New Yorkers really, really want? To wait in line for hours and hours, drinking free keg beer, for the chance to numb their tastebuds and sear their gullets with the likes of kung pao pastrami and pork-laden mapo tofu at what even Pete “Guy Fieri, You’re Dead to Me” Wells called the city’s most exciting new restaurant. Sorry, Gotham, but your hot ticket is our Tuesday night take-out. Mission Chinese Food got its start as a quirky pop-up sharing kitchen and table space with a Mission Street Cantonese joint, and we know thatGQ darling chef Danny Bowien will always love us best. Even better than those black-vinegar peanuts? That in two years, the restaurant, which donates 75 cents for every entree, has raised almost $170,000 for the SF Food Bank.

Take Our Plastic Bags, Take Our Foie Gras, But Hands Off Our Sodas
While New Yorkers kvelled about “Nanny Bloomberg’s” attempt to limit their Big Gulp consumption, San Francisco took October’s ordinance against plastic shopping bags in stride. A 10 cent nuisance fee for paper bags encouraged city dwellers to make reusable bags as much a part of daily living as cellphones and keys. On January 1, Alameda County will join the plastic bag ban. In July, the gavage (force-feeding) method of fattening geese and ducks became illegal in California, wiping foie gras off menus and shutting down foie gras production statewide, inspiring a disproportionally large amount of media coverage (like this soul-searching piece by Ed Lebowitz in The Atlantic, as well as a well-publicized attempt by the Presidio Social Club to circumvent the ban. (Their argument–that the restaurant, located in the Presidio, was on federal land and thus not subject to state regulations–didn’t fly, and the restaurant took foie gras off its menu shortly thereafter.) Meanwhile, Richmond residents defeated Measure N, a proposed penny-per-ounce tax on sodas and other high-sugar drinks, after the American Beverage Association poured over $2.5 million into a No on N campaign.

Backyard Chickens Jumped the Shark
OK, not really. We like waking up to the clucking of a flock of Buff Orpingtons and Silver-Laced Wyandottes just as much as the next soft-hearted urban homesteader. But when Williams-Sonoma’s new Agrarian category started offering a Reclaimed Rustic Chicken Coop, “built by hand using reclaimed redwood and decorated with a hand painted rooster” for $759.95, we did wonder if there wasn’t some truth to this Deadspin writer’shilariously bitter rant about the San Francisco-based retailer. And just as you shouldn’t plant veggies in untested urban soil, so you might want to consider where your cute, free-range city birds are scratching. A recent New York City study found high lead levels in eggs from community-garden chickens.

Put a Hole in It
The East Bay, in particular, had a doughnut-and-bagel renaissance this year, with the opening of Beauty’s Bagels and Authentic Bagel Company, plus Baron Baking, Doughnut Dolly, and Doughnut Savant. Meanwhile, the newly opened Sweet Bar Bakery drew crowds for its I-can’t-believe-they’re-vegan “faux-nuts,” a baked doughnut-like pastry that owner Mani Niall invented while working in Hollywood. It was just one of many small food businesses that opened this year thanks to crowd-sourced fundraising campaigns.

Who’s Playing? Who Cares? We’re Here for the Lamb Poutine
2012 was the year Outside Lands and other big-draw music and entertainment festivals around the Bay became as much about the food as the entertainment, as anyone who spent time at John Fink’s mini-empireOutside Lambs can attest. La Cocina’s Street Food Festival was bigger than ever, with a fun, if chilly Night Market added on.

You Like Us, You Really Like Us
Danny Bowien was definitely a cool cat in the San Francisco chef scene, but it wasn’t until he and his long locks showed up on the Lower East Side to open an outpost of Mission Chinese Food in New York that his celebrity-chefdom flamed hotter than one of his own plates of cumin-spiced lamb. And this year, after moving, then closing, her restaurant and bakery Citizen Cake, California native and longtime San Franciscan Elizabeth Falkner resurfaced in Brooklyn, opening Krescendo, a pizza place. Still, the Bay Area felt some more love than usual from the national media this year, as Travel and Leisure’s Adam Sachs sang the praises of a a new crop of (mostly Mission-centric) San Francisco restaurants, including Bar Tartine, Craftsman+Wolves, St Vincent, Outerlands, Park Tavern, Benu, Rich Table, and others, while Bon Appetit dubbed Pacific Heights’ State Bird Provisions as its 2012 Restaurant of the Year.

Smart Choices for Brain Food
With dispiriting reminders that seafood mislabeling and ocean depredation continues around the world, KQED helped raise the profile of sustainable fishing and seafood consumption, with pieces like
Nothing Fishy About Sustainable Seafood and The Whole Fish: Snout to Tail Movement Meets Gill to Adipose Fin. 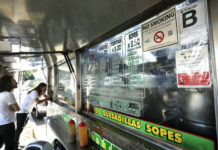 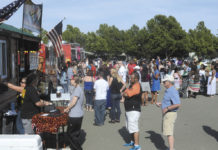 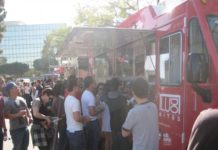