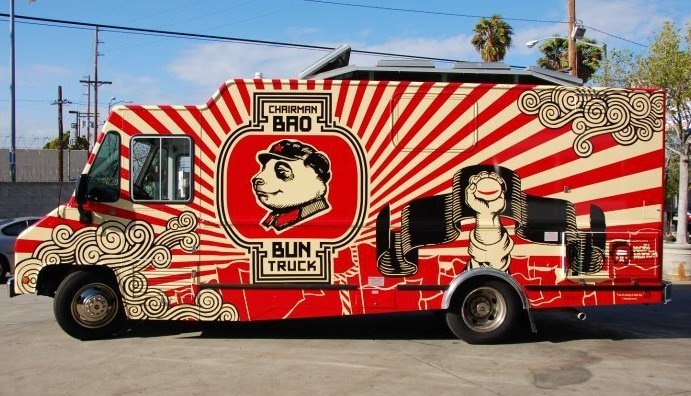 Here’s another incentive, besides generous tax breaks, for Twitter and other companies to move into San Francisco‘s blighted Mid-Market area.

Every week, nouveau food trucks like Chairman Bao, Curry Up Now and Liba Falafel serve up a nourishing assortment of lunchtime street food in front of City Hall (just north of 10th Street) on Friday, at U.N Plaza on Thursday and in an alley outside The Chronicle, at Fifth and Minna streets, on Wednesday.

“Lunch is our consistent bread-and-butter market,” said Matthew Cohen, proprietor of Off The Grid, a food truck promoter and location finder. The company’s two other regular sites are in the Haight neighborhood, where the food trucks are open every Thursday from 4 p.m. until dusk, and in the Mission District, where they operate all day Saturday (www.offth egridsf.com).

With the lines getting steadily longer at all the locations, Cohen is planning to open three more sites in the next couple of months, at Fort Mason in San Francisco, Cupertino (he wouldn’t say how close to Apple) and Berkeley.

Having started off with a dozen or so trucks when he launched the business last June, Cohen expects to double the number he works with in the Bay Area to at least 70 by the end of the year.

Business “exploding”: Another measure of growth: At last count, Off The Grid had 9,536 followers on Twitter and 11,983 friends on Facebook. “It’s our primary means of marketing. It tells customers where trucks are going to be and when. You can’t underestimate what social media has done for the business,” said Cohen.

That’s one reason the “mobile restaurants,” as some prefer to call them, have been “exploding” of late, said William Bender, a food service consultant in Santa Clara. That and “the limited menu approach, high quality and low operating costs have opened up an entirely new sector. I think this is going to stick,” said Bender. Santa Clara, by the way, is one of the South Bay cities that plays host to the Louisiana Territory Truck (think Fried Catfish Po Boys and Shrimp and Sausage Creole).

Full Plate, a San Francisco restaurant consultancy, has recently been approached by would-be mobile cuisine entrepreneurs, including one who wants it “to design a trailer concept from the ground up,” said Jim Maxwell, one of the firm’s principals.

“A lot of people are taking the opportunity to get their culinary skills out in front of the general public, and with a business they can call their own, without the expense of a brick-and-mortar restaurant,” he said.

The cost of entry, according to various estimates, can range from a bare-bones low of $50,000 to lease the equipment and pay ancillary expenses, to $250,000 or more for a deluxe truck and top-of-the-line cooking and refrigeration facilities. At Go4Funding.com, we found a Columbus, Ohio, startup seeking $80,000 from an angel investor to fund a mobile kitchen featuring “grass-fed burgers and french fries cooked in natural fats.”

Top chefs: While the Bay Area is growing in terms of numbers and locations of food trucks, it has a ways to go to catch up with Portland and Seattle and, particularly, Los Angeles. Besides being bigger and more mobile, L.A. is “more truck friendly” than the more regulatory-restrictive San Francisco, says Aaron Noveshen, founder of San Francisco restaurant consultancy the Culinary Edge. Noveshen, who also owns the four Pacific Catch restaurants in the Bay Area, is a partner in L.A. company Mobi Munch, which describes itself as the “first scalable mobile food truck infrastructure in gourmet street eats.” Among its properties: Chairman Bao and LudoTruck, a mobile fried chicken outlet created by celebrity L.A. chef Ludovic Lefebvre.

“This is an example of top-class chefs and restaurants getting involved,” said Noveshen, pointing to San Francisco’s Chez Spencer, whose “French takeaway,” Spencer on the Go, serves up bistro street food Wednesday through Saturday evenings at Seventh and Folsom streets (Foie Gras Torchon and Toast, $12).

Setting aside the possibility of a nouveau food truck bubble bursting at some point, entrants with quality food, a well-defined menu, smart branding and a “bit of whimsy,” in Noveshen’s words, can make for a profitable enterprise, say consultants.

Cohen, who usually charges his clients a base fee of $50 and 10 percent of sales revenue, has one full-time employee, and four, sometimes five, part-time workers. The more Off The Grid expands, the more people he’ll hire.

Is Cohen making a profit? “It’s working out for us,” he said.

Nouveau guide: There are a number of websites devoted to food trucks. Among them:

— www.sfcartproject.com, which provides general information, including a day-by-day listing of food trucks and their locations.

— Mobimunch.com has a truck guide for the Bay Area, Los Angeles and other cities, as does www.mobilecravings.com.

A final note, to be fair and balanced: The city of Brisbane, where Twitter has been rumored to be looking at office space, also has nouveau food trucks, including the Pan-Asian inspired IZ IT Fresh Grill and Ruddy’s Taco Truck, which are particular favorites of Yelp reviewers.