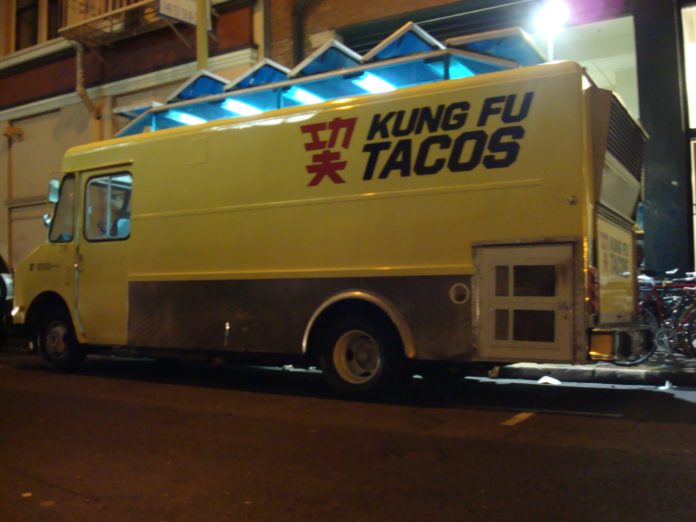 The concept of the mobile food vendor is not new. In the early 1900s, Greek and southern Italian immigrants sold fruit from pushcarts on city streets. Not long after, hot dog carts entered the scene. Greasy spoon trucks selling burgers and fries were staples at summer fairs. Remember the lunch trucks in the 1970s and 1980s that would travel from office parking lot to office parking lot in industrial business parks selling pre-packaged, plastic-wrapped sandwiches, salads, potato chips, and pop? And, of course, there were the chimes of the ice cream truck rolling down suburban streets.

But in recent years, mobile dining has brought unpretentious, “gourmet” street food to the masses. All over North America, food lovers and curious diners are flocking to roving food trucks and mobile “carts” offering fresh, local, and often healthy foods beyond conventional catering truck fare. Think Malaysian mint chicken and braised lamb cheek sandwiches for under 10 dollars and in many cases less than five dollars (we had roast duck tacos with mango salsa for three dollars).

And thanks to the rise of Twitter, these mobile food outlets have found a marketing niche, allowing them to instantly broadcast their changing locations and maintain a following. They tweet their locations and their loyal techie-foodie customers start lining up within minutes. It seems to be a natural fit, as the mobile food vendors embody the short-and-sweet nature of their primary promotional tool. This “upscale” food truck trend seems to have originated in California or New York (depending on whom you ask), but has spread across the US and has shown flashes of taking hold in Canada. But the mobile food scene in San Francisco has taken the culture to a new level. The city by the Bay has experienced an explosion in gourmet food carts serving every type of food, including Mexican, Indian, French, Malaysian, Korean, Thai, Vietnamese, barbecue, contemporary American, desserts, and a multitude of fusion cuisines. And a number of these meals on wheels have received as much popular and critical acclaim as traditional, stationary, multi-starred restaurants.

San Francisco food truck vendors also seem to possess a collegial let’s-work-together attitude, often locating and marketing collectively. Off The Grid is a new food truck extravaganza running on Fridays from five pm to nine pm in the Fort Mason parking lot, bringing together a diverse group of mobile food vendors and live music to the Marina neighbourhood. The day we attended saw hundreds of diners and families pack the parking lot in a fun, food carnival sort of atmosphere. And instead of trying to search out the Twitter and Web sites to find the daily locations of all the vendors, a single site with all the information exists (http://www.findsfoodtrucks.com/).

Perhaps the most relevant reason for the rise of “gourmet” food trucks is the recession. Many fine dining restaurants have either transformed themselves into more casual dining spaces or simply closed their doors altogether. But the demand for great quality food has not declined. In fact, diners are seeking out great quality without the pricey, often pretentious extras that accompany traditional fine dining restaurants. Recognizing the demand, numerous mobile gourmet vendors emerged.

San Francisco has always been a city that loves its food and sets the trends. Things haven’t been any different with food trucks. On a recent trip to the city, I brushed up on Twitter (actually used it for the first time) and spent a week following the mobile gourmets. The delicious, mouth-watering results are reason enough to become a “follower.”

Kung Fu Tacos
With over 3000 followers, Kung Fu Tacos is a hot taco truck that combines Asian flavours with a Latin twist. Tacos run two or three dollars and the menu has a good variety all heaped in freshly made tortillas.  The roast duck taco was delicious, as the naturally fatty duck was perfect with the hoisin sauce, green onions, and mango salsa; and the Mu Shu veggie taco, which combined shiitake and cloud ear mushrooms, carrots, cabbage, cilantro, and onions were slightly sweet with a great chewy texture. As with most of the trucks, they are available to cater private parties and special events.

Spencer on the Go!
A bistro on wheels, Spencer on the Go! serves fine French cuisine including cauliflower bisque, escargot puff lollipops, foie gras torchon, and braised lamb cheek sandwiches. The food is as good as anything you would order in a fine French restaurant (Spencer on the Go! acts as a mobile satellite operation of the Chez Spencer bistro), but everything on the menu is nine dollars or less (except the foie gras which is 12 dollars). The truck parks in the lot of a lube shop on Seventh and Folsom Streets and across the street from the very cool Terroir Natural Wine Merchant & Bar. Order lollipops and cheeks and head to Terroir for a glass of one of Paola Bea’s killer wines from Umbria. This is what great food and wine is about.

Malaysian Lacy Crêpes
Crepes and curry? When it’s mint chicken curry over turmeric crepes, for six dollars, then absolutely. The crepes are made in a random lace pattern (hence the name), and the flavourful curry was loaded with chunks of chicken. A vegetarian curry option was also on the menu as were the addictive chai banana fritters (four dollars).

Sam’s Chowder Mobile
Changing buses twice and a 45-minute walk to Golden Gate Park was totally worth the trip to search out this award winning “mobile seafood shack.” Perfect chowder (five dollars); fish tacos with mango slaw (five dollars); and the best, warm butter-slicked mass of succulent lobster piled in a toasty, buttery roll (10 dollars for a shortie roll or 15 dollars for a full roll). You would easily pay 35 dollars plus for this much lobster in any restaurant, and chances are it wouldn’t be as good. NBC’s The Today Show named Sam’s lobster roll one of the top five best sandwiches in the US. You won’t get any argument from me.

Toasty Melts
Underground grilled cheese on foot? This may be the strangest, yet most endearing of the mobile food vendors. Andy and Lisa (not their real names) prepare about 80 gourmet grilled cheese sandwiches at home (a blend of cheese; a bacon-apple-cheddar grilled cheese; an onion melt with onions, shallots, leeks, thyme, and garlic; and a cream cheese-chocolate-strawberry dessert sandwich are some of their choices), hit the street with their propane-fired pancake griddles, tweet their location, and sell the three to five dollar sandwiches to the lined up crowd until they are sold out. They source their products from the farmers’ market, and the bread is a secret. Both partners work full-time jobs and do street food “just for fun.”

El Norteno
Usually located outside the courthouse in the SOMA district of SF, El Norteno is an old school taco truck with no website or Twitter account, just phenomenal food. Lawyers, cops, judges, and sometimes, even prisoners line up for the amazing tacos … carnitas, asada, al pastor, cabeza, lengua, buche, gallina, camaron, and more. Order a selection of tacos with a Mexican Coke for about 10 dollars and eat on the trunk of your car for a true urban experience.