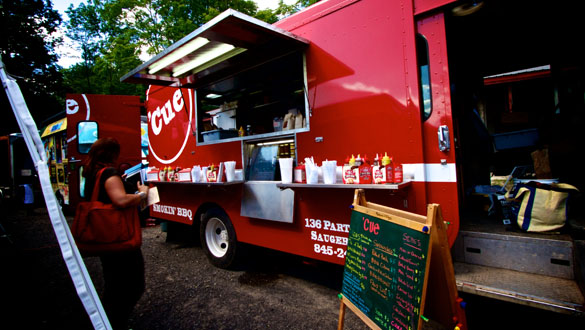 By Will Dendis  |  Saugerties Times 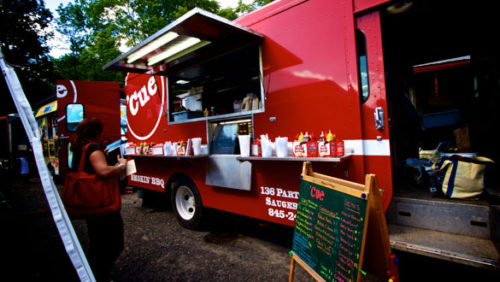 A popular monthly food truck festival will likely cease operations at its Rt. 212 location after getting hit with zoning violations by the town, said organizer Marc Propper.

“I think now we’re looking at relocating the festival,” he said. “They’re making it hard.”

The festival, which was held four times at fiberflame art studio near Woodstock, included eight food trucks, a large tent, live music, walk-in crafts and movies. It appears to have been a victim of its own success: a significant number of cars had to park along the road, with pedestrians walking to and from the festival along the shoulder— a dangerous situation Planning Board chairman Howard Post called “an accident waiting to happen.” Once the town is aware of a hazard like that, if it allows it to persist, it could be liable, said Post.

For the festival to continue at this location, fiberflame would need its zoning changed, the tent would need a permit and the Town Board would have to change a law forbidding offsite event parking. (Attendees would park somewhere nearby and take a shuttle to the festival.) The county Planning Board would also have to be brought in because it’s a state road. Post said even if everything went off without a hitch, the process would take at least four to five months.

Propper, a busy guy who co-owns Miss Lucy’s restaurant and ’Cue on Partition St., as well as the ’Cue food truck, probably won’t have time for all that. “It’s in the middle of our season,” he said. “We’re doing a lot of other stuff.”

Propper said it would be great if someone offered a location with the proper zoning and enough on-site parking. He said the village might be a good location because the Village Board has considered the issue already this year and understands the growing popularity of food trucks (though its food truck law focused on sustained operations by individual trucks, not festivals).

But for now, Propper said it looks the next festival, scheduled for Aug. 15, will be called off.