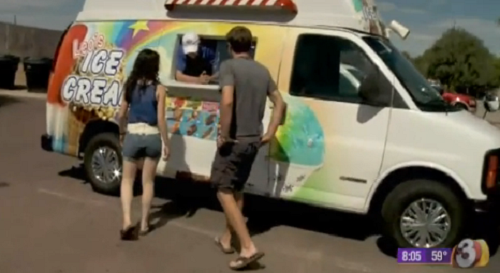 Scottsdale decided to ban mobile food trucks in the 1970s because of concerns that the trucks were being used as fronts for drug operations.

Dubbed, Leo’s Law, the proposed ordinance to bring the trucks back is named for Leo Blavin, a teenager who launched his own ice cream truck business, Leo’s Ice Cream, in 2011. Stunned to learn he wouldn’t be able to do business in his own city, Blavin contacted the mayor and work on lifting the ban began.

“Children across the country love the daily Ice Cream Truck visit,” Blavin, then 16, wrote in an email to Mayor Jim Lane in August 2011. “Yet in Scottsdale ‘The Most Livable City’ such a fond childhood aspect is outlawed.”

Right now, ice cream trucks are allowed on private properties in Scottsdale by invitation only. Operating on public streets, however, is illegal.

Some residents fear allowing the trucks will lead to increased crime in their neighborhoods. That fear is the reason ice cream trucks were banned in the first place.

“The Mayor and city staff have taken great steps to make sure that the rights of businesses are balanced with the rights of residents,” J.P. Twist, the mayor’s chief of staff, said in an email Tuesday afternoon, just hours before the City Council meeting. “Every concern that we heard from residents during our public outreach period has been addressed in the current ordinance. For example, all operators will be required to pass a criminal background check. Will be required to be licensed by the city and will be required to have extensive insurance requirements, among many other things.”

In addition, the ordinance would only allow operation from 10 a.m. to sunset. Vendors would also be prohibited from selling ice cream in commercial parts of Scottsdale, city parks, and within 600 feet of a school when school is in session. Vehicles would have to carry “Watch for children” signage.

If the ordinance is passed, the ice cream trucks would not be allowed to play their signature jingles while stopped and conducting sales. What’s more, operators would have to wait 48 hours before returning to a specific neighborhood, which means they could not claim a corner or a street on a daily basis.

The City Council is set to meet at 5 p.m.

“The Mayor is confident that the ordinance will pass and is looking forward to ice cream trucks being back in Scottsdale,” Twist said.

Also on the agenda for Tuesday’s meeting is an ordinance laying outregulations for pedicabs.