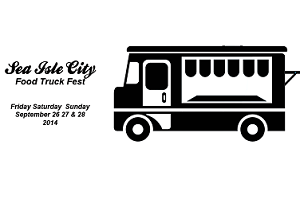 The Jersey Shore is renowned for its beaches, boardwalks, and the food that goes along with them. In September, Sea Isle City will host a brand new food festival that has never been experienced in Cape May County.

Denis Brown, who works at Cape May radio station 98.7 The Coast, said he and his fiance, Elizabeth Hargett, were looking for a side project when considering creating an event.

“She has experience with events and I have experience with marketing,” Brown said. “Food trucks have just become really huge in Philly and New York. It’s a really cool concept to bring down here.”

The festival will open for a preview Sept. 26 and fully open Sept. 27 to 28. The preview night will feature only some of the food trucks and vendors opening.

When the pair started planning for the festival, they hoped to be the first food truck festival in South Jersey. Since, the “Truck”erton Food Truck and Brew Fest was held in Tuckerton Aug. 27.

Although Brown said Tuckerton “got there first,” he’s happy to bring food trucks to Cape May County before anyone else. After conducting some research, Brown and Hargett confirmed, as of Aug. 22, 10 trucks will participate in the festival. They’re hoping for around 12 to14.

“Food trucks (popularity) are growing so I don’t see why we couldn’t have some of that down here as well,” Brown said.

Along with food trucks, the festival will include live music, games for kids, and crafters and vendors. And the best part? There is no entrance fee to the festival.

“For the people down here I think it’s cool,” Brown said.

Where: The property of Kix McNutley’s, 63rd and Landis Ave., Sea Isle City

Additional Info: Entrance to the festival is free! Food, however, is not.