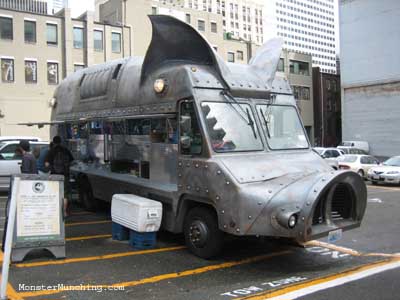 When those stomachs start grumbling during lunch hours, heads are turning to the street- food trucks have transformed into a culinary delight for the taste buds.

The street food movement has only started in the past few years. Food Network’s, The Great Food Truck Race, has really sparked America’s interest. Now, hungry customers can eat more than “street meat” and hotdogs. ­­With over 300 mobile food vendors in Seattle, just over 100 of them being trucks or trailers according to Public Health- Seattle and King county, options are endless: Thai, falafel, Cajun/Creole, burgers, pulled pork sandwiches, ice cream, Korean or Mexican, you can have it all.

However, food trucks have an added challenge most restaurants don’t – the weather. The popular, Maximus/Minimus recently closed up their pig-shaped truck for the season.

“It’s a business decision really,” said Lance Marlow, general manager Nov. 3 by phone. “Traffic dies down drastically once the weather turns and it doesn’t make business sense to try and operate during the winter.”

Kurt Bammier, owner of Sugar Mountain, home to Pasta & Co, Beecher’s and Bennett’s, started Maximus/Minimus June 2009. He used to cook pulled pork sandwiches in the corporate headquarters that everyone loved, Marlow said. They set out to find a place close to the office where they could sell the sandwiches.

“When they couldn’t find a suitable space they looked into the food truck option which. somehow naturally became a pig-shape food truck,” Marlow said.

During the season, Maximus/Minimus is usually located on Pike and 2nd from 11-2 pm during weekdays, and on afternoons and weekends they go to farmers markets, private events and sporting events.

Other food trucks choose to tough it out year round and stay open.

Freddy Rivas, owner of Rancho Bravo Tacos said Nov. 3 by phone, “The weather has a huge impact on business but we just have to go with it.”

Rivas opened his first truck February 2007 after being in another business. He said he remembers returning from his lunch break everyday and feeling like he wanted a nap.

“One day a client took me out to a taco truck in a parking lot; I ordered two tacos and I was hooked,” Rivas said. “It was the first time I could remember coming back from lunch and not being drowsy.”

Rivas now has two trucks, in Wallingford and North Seattle at 105th and Greenwood, as well as a restaurant on Broadway in Capital Hill. Rancho Bravo Tacos does all their cooking fresh, on-site with some outside prep work. The trucks stay open for lunch, dinner and even some late nights.

Rick Baker, the owner of Hallava Falafel (5825 Airport Way South in Georgetown) opened his lunch truck in 2006 for similar reasons.

“I decided there was no street food and very little good falafel so I would open a falafel truck,” Baker said Nov. 3 by phone.

As for the challenge of the weather, Baker said, “you go to work don’t yeah – although some days you don’t want to; we stay open and people show up.”

Another added challenge of food trucks is how they get their name out to the hungry masses. Most truck owners say they rely on the “buzz” their food brings.

“I just make good food and people will tell other people,” Baker said of Hallava Falafel.

However, trucks that move from location to location, such as, Where Ya At Matt, turn to social media. Matt can be tracked on Twitter at @WhereYaAtMatt or on their website. This past week he was in Bellevue, South Lake Union, Interbay, Georgetown, Belltown and Beacon Hill.

Any food trucks operating in King County need to have a commissary for prep work/cooking, as well as a local food vender’s license from the Department of Health for each county they sell in, a department of transportation license, a business license and must pass inspection from Washington state patrol.