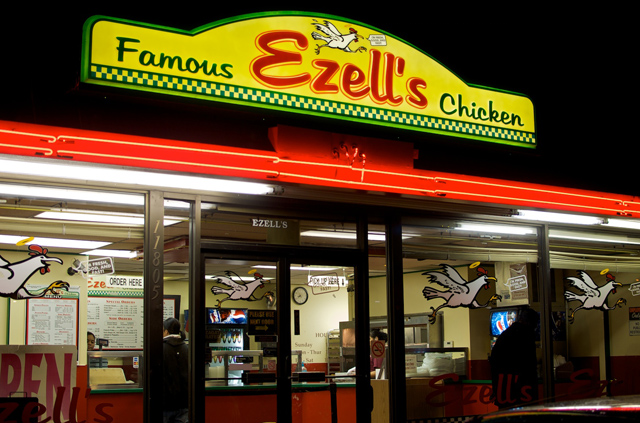 We were just talking about a hotcakes-on-a-stick food truck. Even high-end hot spots are going mobile. But it’s finger-licking interesting to hear that a business as long-established as Ezell’s Famous Chicken is joining the food truck flock. It’s part of a broad expansion of the “most life-changing fried chicken” chain that includes an upcoming brick-and-mortar franchise in Dubai, a couple local franchise outlets, and plans for many more, partnering with a former Cinnabon CEO. The owners of the upcoming Ezell’s Express, though, are part of the family in more ways than one.

Phylicia Davidson, daughter of Ezell’s co-founder Lewis Rudd (Ezell Stephens himself is now heading Heaven Sent Fried Chicken after a long legal battle) took on the food truck franchise with business partner and cousin Jennifer Stephens, who had managed the Skyway Ezell’s with her back in 2004. She and Stephens had such fun working together, “frying chicken, taking orders, whatever it took,” they talked about operating a restaurant together even back then, in their early 20s, though Davidson went on to work at Microsoft instead.

“I’ve watched my dad deal with the family business in so many different capacities (and thought) that will never be me, it’s too much. But at the same time, there’s been times when I’ve watched this joy come over him…watching him with this dream,” she said.

During a catered Microsoft event, she found herself talking with the owners of Skillet Street Food, and thought a food truck might work with both her work and family goals. She and Stephens took on the project together.

The first Ezell’s Express is expected to open in April, with a limited menu focusing, natch, on the fried chicken. (The one side it’ll have at opening is a mini-version of the famous rolls – “my favorite,” Davidson said.) As time goes on, they’ll look to expand the menu as well as the number of trucks.

“There are still a lot of people out there in Seattle who have never heard of Ezell’s…probably because there’s not an Ezell’s close to them. This gives us the opportunity to really reach a wide variety of people,” she said.

They’ll be using social media to ask what people want to see in terms of hours, locations, menu, and whatever else comes up — and she promises that they’ll be listening.

“We’ve always felt as a family business that the community has helped us. We definitely want to hear what they have to say.”