By  Roll With Jen | Seattle Weekly

When talking about the memorable meals I have had from Seattle food trucks recently, my pal from Portland retorts, “P-town is so much more progressive when it comes to the mobile food scene.”

Game on sister; you’re steppin’ with your gat on safety because here are three mobile food concepts originating from Los Angeles, Portland, and San Francisco that Seattle has covered.

Concept #1 from LA, Brick and mortar to truck: Nineteenth century philosopher Nietzsche said, “The only way to start a Seattle food truck article is by talking about Los Angeles.” Instead of ceasing operations while L.A.’s Chego undergoes a complete remodel, the founder of the Korean taco truck sensation Kogi – Ray Choi – decided to operate from a truck. After all, that is how he built his fame as the supplier of the original 2 dollar Kalbi beef taco back in 2008.

Serving pork belly rice bowls, “3pm” meatballs, and ooey gooey fries, Chego churns out a faithful representation of their restaurant menu from their temporary truck location parked on the curb of their brick and mortar.

While the staff cannot wait to get back to the restaurant because all agree operating out of a truck is a lot harder, Chego’s street cred’ certainly increased by getting back on the street.

Seattle’s version: With seven locations in the Seattle area, the fried chicken institution Ezell’s Famous Chicken is hitting the food truck scene in April with Ezell’s Express. Oprah will be pleased. You’ll never guess what their main menu item will be.

Concept #2 from Portland, Specialize: In our consumer-supported society, I am grateful for the rows of toilet paper selection at a grocery store, but sometimes I wish someone could just tell me which one is best for my tush. Another of my orifices feels the same about food trucks – just pick for me. This is where Portland’s Nong’s Khao Man Gai steps in. Nong has one item on her menu, her Hainanese chicken rice. Since she has specialized, she is able to turnaround orders lightning fast and focus on making the tastiest chicken rice this side of a hawker center in Singapore. Nong has such a loyal following she oftentimes sells out by 1pm. 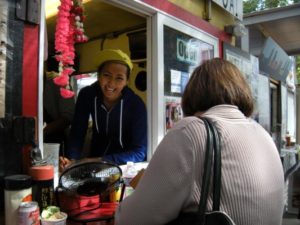 Seattle’s version: In a similar vein, the owners of Diablo Food Truckz in Seattle have also focused on one headline dish: Yakisoba pan sandwiches. Translation: Noodles in your sandwich. Trust me, this is one of those dishes that perplexes people until they try it, and then they can’t get enough.

Concept #3 from SF, Get creative with Asian: I am always coveting the plethora of Asian-themed food trucks in the Bay area that strut their stuff by offering more than your Amercianzied fried egg roll. Hongrykong, for example, serves up Hong Kong-styled cuisine you can generally only find at dim sum joints or back in the motherland, ranging from egg custard tarts and siu mai dumplings. Chug down all of your treat with one of the country’s most prized drinks, an iced ovaltine. 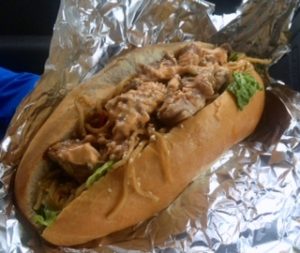 Another much-loved SF truck, The Chairman, delights customers with their Taiwanese baked and steamed buns. Their Coca-Cola Braised Pork with Savoy Cabbage & Preserved Yellow Mustard Seeds is a must-try.

Xplosive owners Cathy and Romano Basilio also stay true to their Vietnamese and Filipino roots while having fun with dishes such as their grenade banh mi sliders and Xplosive chicken adobo fried rice.

Seattle may not have led in these concepts. But Seattle didn’t invite hip hop either, and Macklemore is blowing it up.