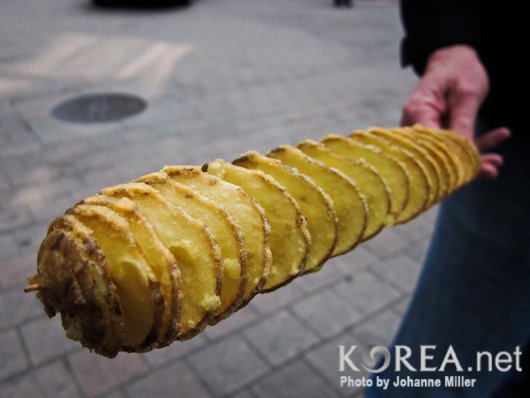 This month Steve Miller is exploring some of the tasty treats made available on the streets of Korea. Steve had a difficult time narrowing down the food selected for this series, since Korea as so many options. This week he’s featuring a foreign food presented with a twist and first served up in Korea: The Tornado Potato (회오리감자).

Tornado Potatoes made their first appearance in Korea between 2005-2007. They are made by either skewering the whole potato and cutting with a specialized spiral slicer, or by first cutting the potato and then skewering it. The latter method is often employed when adding a sausage. The potato is spread evenly along a skewer and deep-fried. The cooking process fuses the potato to the skewer and holds it in place. When it’s served to the customer, the tornado potato is often sprinkled with seasoning. Common flavors are cheese, chili, and barbecue. Sometimes they’re even served with dipping sauces.

Tornado Potatoes were once fairly popular in Seoul, not only being found served up on street corners, but in several of the city’s fried chicken restaurants. However, today it’s a little more difficult finding them. In all my explorations of Seoul, I’ve only come across them in two locations: Myeongdong and Hyehwa. That doesn’t mean you can’t find them elsewhere in Seoul (or around Korea), but they are not as prevalent as other kinds of street foods.

Belgian journalist, Jo Gérard, reports that a 1781 family manuscript recounts potatoes being deep-fried prior to 1680 in the Meuse valley: “The inhabitants of Namur, Andenne, and Dinant, had the custom of fishing in the Meuse for small fish and frying, especially among the poor, but when the river was frozen and fishing became hazardous, they cut potatoes in the form of small fish and put them in a fryer like those here”. [(French) Hugues Henry (2001-08-16) La Frite est-elle belge?. Frites.be. Retrieved on 2012-09-12.; Ilegems, Paul (1993). De Frietkotcultuur (in Dutch). Loempia.]

Some Belgians believe the modern name was introduced when American soldiers arrived in Belgium during World War I. The Americans called them “French Fries” because French was the official language of Belgian Army. It was during this period that fried potatoes began surging in popularity. However, in southern Netherlands fried potatoes are still called Vlaamse Frieten or Flemish fries. [(French) Hugues Henry (2001-08-16) La Frite est-elle belge?. Frites.be. Retrieved on 2012-09-12.]

How to Make French Fries

If this post has got you thinking, “I could go for some French fries right now”, below is a recipe for you to try. It’s for traditional French fries, as Tornado Potatoes require a special cutting tool.

Rinse the cut potatoes with cold water. Do this until the water is clear. Then soak the potatoes in cold water (add ice if you need to) in the refrigerator for 30 minutes to 2 days. For best results, make sure you have at least 1 inch of water above the potatoes when soaking them.

In a 5-quart pot or in an electric deep fryer, heat the oil over medium-low heat until 325 degrees F (163 degrees C). Make sure to have at least 3 inches of space between the top of the oil and the top of the pan, as fries will bubble up when added.

Drain ice water from cut fries and wrap potato pieces in a clean cloth or towel. Thoroughly dry. Increase the heat to medium-high and add fries, a handful at a time to the hot oil. Fry, stirring occasionally, until potatoes are soft and limp. They should start to turn a blond color after 6 to 8 minutes. Using a skimmer or a slotted spoon, carefully remove fries from the oil and set aside to drain on paper towels. Let rest for at least 10 minutes or up to 2 hours.

When ready to serve the French fries, reheat the oil to 350 degrees F (177 degrees C). Transfer the blanched potatoes to the hot oil and fry again, stirring frequently, until golden brown and puffed (about 1 minute). Transfer to paper lined platter and sprinkle with salt and pepper, to taste. Serve immediately.

What do you think? Care to give it a go? If so, let us know how they turned out. If you choose not to make your own, how do you enjoy French fries?

Steve Miller is Korea’s best-known travel video blogger. His videos have been viewed over 3 million times and seen on major international media outlets in Korea, France, the Philippines, Thailand, and CNNGo. In addition to sharing his entertaining and informative videos, he writes for various Korean Tourism publications and shares travel advice on Korea’s domestic and international radio outlets.