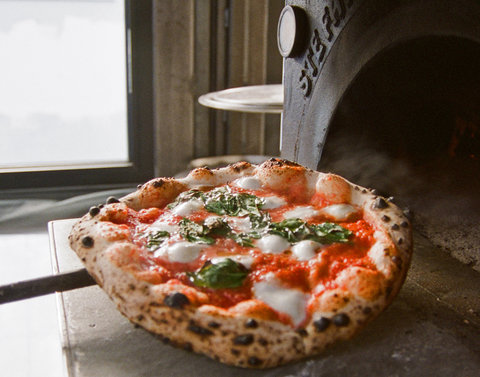 SAN FRANCISCO — In Sunday’s Automobiles section, I write about the Del Popolo pizza truck and how it came to be a foodie phenomenon in the Bay Area. From the beginning, the truck project was in seasoned hands.

In July 2009, while working on a review for The Times of Flour + Water, an Italian restaurant in San Francisco, I made the acquaintance of Jonathan Darsky, the restaurant’s pizzaiolo, who went on to create the Del Popolo truck.

Peering into the mouth of a wood-fired oven and perspiring acutely in the heat on that July day, Mr. Darsky vigilantly escorted one pizza after another through the flames. There was no margin for error at this temperature, he explained. One moment you’ve got a perfectly cooked margherita, the next, a fireball.

Over the next few months, I consumed several of Mr. Darsky’s pizzas, which in keeping with the Neapolitan ideal were intensely flavorful yet ineffably light and delicate, the sort of thing you might inhale in the blink of an eye. When Mr. Darsky left Flour + Water in January 2010, I kept an ear out for news of his re-emergence.

Last summer, Jeff Krupman, a mutual acquaintance and a talented pizza chef in his own right, mentioned that Mr. Darsky was working on a new project. Mr. Krupman seemed reluctant to divulge more and suggested I talk to Mr. Darsky in person.

I contacted Mr. Darsky and arranged a meeting. He arrived with a sheaf of papers, among them a computer rendering of an unusual-looking vehicle, consisting of a Freightliner M2 106 truck, a 20-foot shipping container and two-and-a-half-ton Neapolitan brick oven.

The components, Mr. Darsky explained, were in Hanford, Calif., awaiting modification and assembly at the manufacturing plant of McLellan Equipment, a company that builds specialized truck bodies for the construction industry.

I followed the progress of the project, making two trips to Hanford to document the fabrication and assembly work. Last month, when Mr. Darsky and the truck, named Del Popolo, made an unannounced appearance in this city’s Mission District, I observed the scene from inside and outside the kitchen, and connected with some long-awaited pizza.