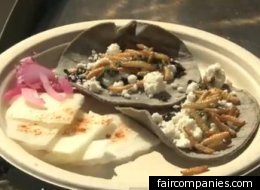 In August, hundreds of San Franciscans lined up on Folsom Street to taste the goods at the famous S.F. Street Food Festival. Faithful patrons crowded ice cream and tamale carts and waited half an hour for a slice of Flour + Water pizza. But the most adventurous diners didn’t waste time with the local standard fair. They headed straight for the wax moth larvae tacos at Don Bugito.

Don Bugito, a local business that has started selling Mexican cuisine featuring edible insects, is aiming to change the way San Franciscans think about bugs. And soon, the company will be serving up their fare at a full-time food cart.

“In Mexico, the pre-Hispanic cuisine included a lot of edible insects,” explained owner Monica Martinez. “It’s because it’s such a good source of protein.” For a protein fix, her customers can stock up on larvae-filled tacos or vanilla ice cream topped with mealworms caramelized in sugar and rum.

“In general, people are unfamiliar with this,” laughed Martinez. “I know it’s not an easy thing. But I didn’t think it was easy when people started eating sushi in the Western world.

Martinez became fascinated with sustainable food systems upon moving to San Francisco. “Raising something that I can see, understand the cycle of it and then consume…is a big challenge. It’s a big step for me towards understanding what I eat.” The mealworms Martinez raises are cheap, produce extremely little waste and are filled with fat and protein. “I buy 250 for $8,” said Martinez. “It’s really cheap.”

At the street fair, Martinez’s customers reported that the larvae tacos tasted “like a taco,” with one customer swearing the bugs tasted like pork.

Eager to get your fix?