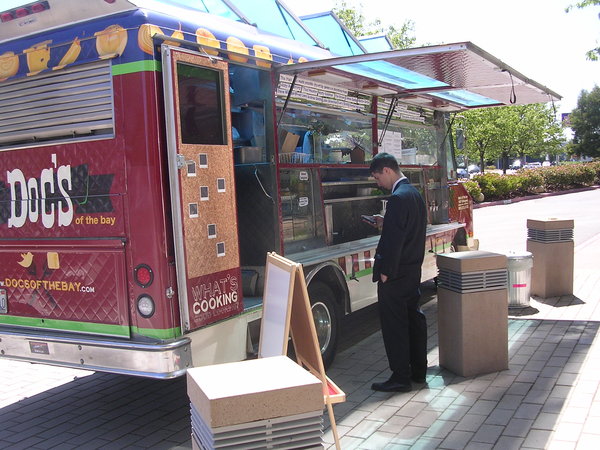 San Francisco’s small army of food trucks feeds happy consumers every day. But behind the scenes, the mobile vendors have been complaining to the city for several years about a notoriously convoluted permit process.

In March, the Department of Public Works was given the task of implementing new regulations that the Board of Supervisors had passed last fall in an effort to streamline the process.

A large group of hopeful mobile vendors camped in tents over a rainy weekend to be first in line to apply for the new permits.

But as the first applications begin to wend their way through the new system, the process does not appear to be very efficient.

Around 70 vendors applied for the new permit (each applicant can apply for up to seven locations). The applicants must then go through a 30-day public notice process for each desired location, sending out letters to businesses within 300 feet of that site — and to residents, if the truck will be operated at night. Like other business permits granted by the Department of Public Works, even one objection will trigger a hearing.

As of last week, just 3 food truck applicants had made it through the public notice period — and out of the 12 locations those vendors want to use, 6 have already been challenged.

The Department of Public Works has yet to schedule hearings, and said that it did not know when any permits would be issued, given that even uncontested applicants have to pass health and fire inspections.

The agency and vendors say that they hope to address some concerns before the hearings.

Zak Silverman, proprietor of Doc’s of the Bay, an American-food truck, held a community meeting last week after learning that Haight residents started a petition to block his truck from operating at his preferred location on Divisadero Street.

Mr. Silverman said that while there was a civilized discussion, attendees still said they would oppose his truck’s entrance into the neighborhood.

Meanwhile, the city’s existing food trucks are going strong: Off the Grid, for instance, a popular food truck event, will be increasing the frequency of its operations around the Civic Center. And under a separate new permitting process, food trucks are also being allowed to operate in city parks.

While Ed Reiskin, director of the department of public works, said that it was too early to evaluate the program, he said he hoped to see the new trucks on the streets in less than six months. “Part of the impetus was to do some streamlining on the front end,” Mr. Reiskin said. “With some of the public process, it may seem like the opposite.”