The worlds of technology and table manners came together today at a breakout session on social media marketing at the National Street Food Conference held at the Fort Mason Center in San Francisco.

The National Street Food Conference was organized by, which La Cocina is an incubator for food startups run by immigrant entrepreneurs who want to share their native cuisine with the worldly diners of San Francisco. La Cocina vendors have use of a commercial kitchen for food prep, and have access to advisors who are there to help navigate the city permitting process and other legalities of selling food to the public.

On hand to share best practices were Lisa and Brain Wood from Big Ass Sandwiches in Portland, OR, Joshua Henderson of Skillet Street Food in Seattle, and Matt Cohen, the owner and operator of Off The Grid, a veritable rodeo of food trucks in San Francisco, with more than 70 vendors. The panel was moderated by Baylen Linnekin, a lawyer, researcher and dedicated food writer.

Technology has transformed the way the entire food industry markets its products, said Linnekin in his opening remarks. He used the word “revolution,” and drew parallels between popular uprisings in the Middle East, the London riots, and the explosion of the popularity of street foodie gourmets in the U.S. Linnekin also pointed out that Mohammed Bouazizi, the young Tunisian man credited with sparking the so-called Arab Spring, was himself a street food vendor who sold veggies.

Street food sales have been documented from ancient Egyptian times. What’s different about today’s food trucks is the idea that they are “gastromobiles,” making high quality food, and bringing it to their audience. Serious Eats in 2009 was able to list 53 trucks nationwide that were doing mobile gourmet food and marketing themselves with social media. In 2011, Linekkin said there may be as many as 117,000 trucks nationwide, according to his research, though he said he couldn’t get Foursquare to comment on his findings.

There are no shortage of food apps and startups out there, but there are two standout tools that food vendors themselves use for marketing. You can probably guess which ones they are: Facebook and Twitter. While panelists had varied opinions on when and how to use Twitter or Facebook, location updates, special offers and conversations were the features of both they found most appealing. Facebook’s fan page was a great way to leverage static information, while Twitter was a good way to share to interact with customers in a rapid-fire, chatty manner.

After using social media to promote their food businesses, most would never go back to traditional advertising. Cohen of Off The Grid said he spent $500 printing $1 off fliers, and after a run of 10,000 prints, only one coupon was redeemed. Social media marketing is free, and only requires an investment of time.

But what surprised me was the limited extent to which any of the newer social media tools were being used. Feelings were mixed on whether Yelp was helpful or not, but Cohen, of Off The Grid said it was helpful for service recovery, and as a way to determine if business owners were effectively dealing with customer issues as they arise. Foursquare was seen as a headache, and no one on the panel knew what FoodSpotting was, or how to use it. Groans erupted when the word “Groupon” was uttered, and Lisa Wood of Big Ass Sandwiches said that a deal they ran with Groupon nearly put them out of business in their first year, after they sold 2,000 vouchers instead of the 400 they had anticipated.

In the end, though, the most innovative application of social media in marketing street food had nothing to do with the technology. Big Ass Sandwiches has an iPhone app that allows in-app purchases, and menu updates with about 1,700 downloads, versus more than 3,200 followers on their @BigAssSandwich Twitter account, It’s the ability to understand customer sentiment that really matters.

Lisa Wood said that on a service like Yelp, its important not to take the highs too high, or the lows too low, when guaging customer feedback. Henderson of Skillet agreed, saying that business owners in the past used to operate with blinders on. Most of the time you only hear back when something is wrong, through a comment card or an angry voice mail.

So for all the potential to market through social media, it would seem that the real revolution, at least for now, is the ability to listen. 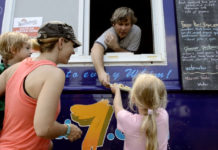 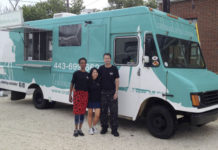 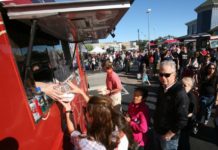