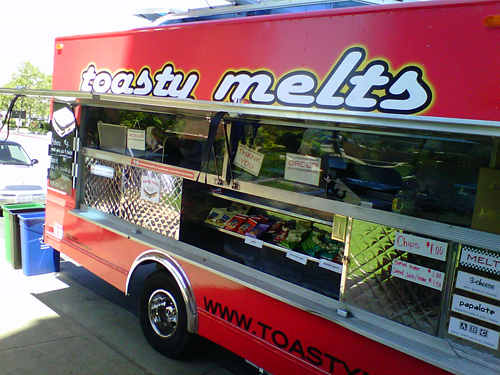 The mere mention of a grilled cheese food truck tends to evoke one of two responses:

Sure, you can make it yourself at home. But it can be easier, not to mention tastier, if you get it from the folks at ToastyMelts.

It’s our universal love and affection for creamy melted cheese on perfectly toasted buttery bread that has made the San Francisco food truck, Toasty Melts, so successful.

Business partners, Tiffany Lam and Alex Rando, started the Toasty Melts food cart in 2009 after being inspired by other popular carts like The Magic Curry Cart and The Creme Brulee Man. They also figured they could donate a portion of their earnings to the San Francisco Food Bank, where they were regular volunteers.

So why switch from part-time food cart hobby to full-fledged food truck? “Matt Cohen wanted us to come to Off the Grid, but we weren’t that ambitious because we both had day jobs,” says Lam. She was a project manager for Marin company, Republic of Tea, and has since quit to devote herself completely to Toasty Melts. Rando is still at his day job. “We heard rumblings last year that the permit process was going to change. So last September, we finally started looking for a food truck to transition to,” says Lam.

But here’s the kicker: neither of them have any professional culinary experience. None! And that’s exactly how they came upon the decision to focus solely on the simplistic grilled cheese sandwich.

“There’s no way we could do something fancier. It was definitely something we could execute. If we could do it, anyone could do it! It was the most realistic food avenue for us to take. But it’s also very versatile. We could be creative with the grilled cheese sandwiches and blend products to make different variations.”

This simple sandwich requires no special equipment. They make the sandwiches on the truck’s grill, cooking them up evenly to a perfect golden brown.

I tried their two signature sandwiches: The ABC, which has thin apple slices, bacon from Zoe’s Meats and cheddar cheese; and the 3 Cheese, made up of smoked gouda, jack and cheddar cheeses. Both were served on Panorama bread, made locally in San Francisco. Most of the cheeses they use are from Kerrygold.

Both sandwiches had the perfect amount of toastiness: golden brown in color with the right amount of crunch. But the interior of the bread was also soft and pillowy with just enough buttery goodness.

The 3 Cheese stood out because it was amazing to me how distinctive all three cheeses were even when melted together. The jack cheese was smooth and creamy, the cheddar gave it the classic flavor, and the gouda provided a wonderfully sharp punch that made it stand out. I absolutely loved it.

I have to admit, though, that I wanted more from the ABC. The best thing about it was the thinly sliced apples, which gave the sandwich additional texture and a subtly sweet contrast in flavor. The bacon, unfortunately, was a bit dry and rubbery. I would’ve loved if it were more crunchy. And I longed for a cheese with a tad more flavor. The jack cheese just couldn’t hold its own.

Regardless, their sandwiches are still worth going back for, especially if you’ve got a hankering for a good grilled cheese. They are fresh, contain quality ingredients, are perfectly toasted + gooey, affordable at $4-$6 a pop, and easier than making it yourself.

“Who would want to shred and blend three different cheeses for one grilled cheese at home? We also provide the novelty and the convenience,” says Lam.

For now, you can find them at Off the Grid on alternating Mondays at Civic Center Plaza and on alternating Tuesdays at UN Plaza, along with possible regular stops in San Mateo and Brisbane. Lam wants to have a firm presence in San Francisco, though, despite the food truck permit drama that seems to happen frequently these days.

“We’re going to continue to pursue all our permits for various locations in San Francisco. And Alex and I would love to expand our menu at some point. For now, it’s just the one truck. My Dad owned a restaurant and I don’t know if I really want to own a brick and mortar restaurant. This one truck takes every ounce of my energy!”