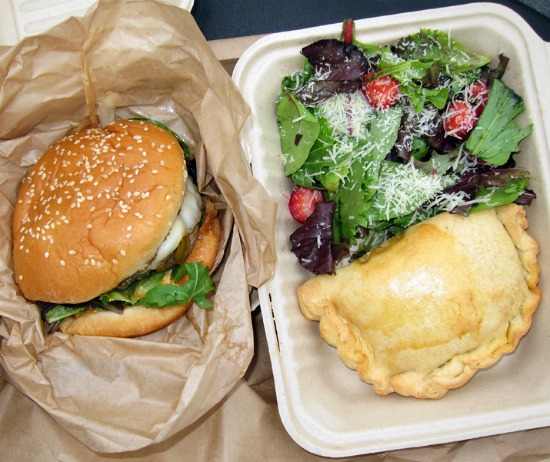 SFoodie was eager to check out Whisk On Wheels, a 2-month-old food truck operated by an Argentine chef.

So far, Argentine food trucks like Tanguito and El Porteno have enjoyed great success in the city, though the East Bay’s Primo’s Parrilla food truck called it quits earlier this year.

The staff told us that chef-owner Matias Bordaverri has 17 years of cooking experience working in South and Central America, the Caribbean, and the U.S. His focus is organic and sustainable cooking. Customers can expect to find occasional Mediterranean-style specials along with the regular menu items: Angus burger ($8), grilled chicken sandwich ($7), and empanadas ($5.50, 3 choices: beef, chicken, or spinach and ricotta).

​We ordered the most popular items, a burger and a beef empanada.

This was one of the juiciest burgers we’ve had in a long time, though it wasn’t a Juicy Lucy. The burger was cooked medium and topped with grilled onions and bell peppers and melted provolone cheese, while the bottom had baby greens, a tomato slice, and smoked-pepper mayo. We couldn’t discern the secret ingredients in the meat patty, but specks of green herbs were noticeable. Our theory was that the ground meat was blended with chimichurri sauce. Whatever it was, it was delicious.

​ The empanada was a traditional baked version with ground beef, onions, olives, raisins, chopped hard-boiled eggs, and spices. It’s served with a side salad of baby greens, strawberries, and reggianito cheese (an Argentine cow’s milk cheese similar to Parmesan).

The dough is similar to that of fellow vendors Chile Lindo empanadas, Mama’s Empanadas and Mas Empanadas. It’s every bit as good as the empanadas we’ve found while traveling in South America.

Whisk on Wheels is in the regular rotation of Off the Grid food trucks. The owners don’t tweet very often, but do update their Facebook page, so look for their upcoming locations there.