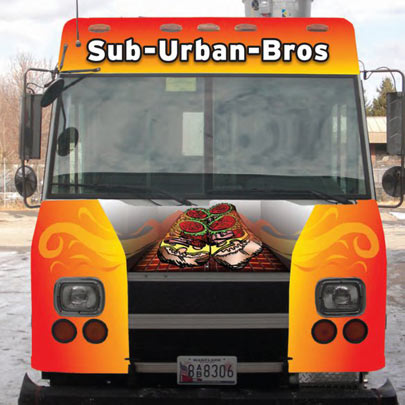 The mobile gourmet food business keeps on truckin’ in downtown Silver Spring and throughout the county.

The gourmet food truck trend continues to leak across Washington, D.C., lines into Montgomery County. The trucks started off as a trickle in Rockville and Silver Spring, with a few parking near the intersection of Colesville Road and Georgia Avenue. More food trucks have been showing up in the same place, organizing meet-ups with a couple of trucks via Twitter. More trucks are slated to hit the road this month.

Though more food trucks have been targeting Silver Spring, they are still working to gather a following and are not yet near the cult-like status of those in the District.

“There have been more trucks coming into Montgomery County,” said Shane Patterson, co-owner of Sub-Urban-Bros: The Great Sandwich Truck. “It’s not nearly the same as D.C. There are not as many people coming out, but it’s not bad. It’s getting better every day.”

There are 93 licensed food trucks in Montgomery County, county spokeswoman Mary Anderson said. As of last month, sandwich truck Sub-Urban-Bros. had been frequenting Silver Spring along with Tops American Food Company, which sells chili and hot dogs. The two have been working together on Colesville Road and organizing with new trucks. The trucks also travel throughout the county to hubs in Gaithersburg, Rockville and Olney.

Recently, they have been joined by cupcake truck DC Love Bites, which is based in Silver Spring. The truck sells many varieties of cupcakes, including everything from red velvet to lemon chiffon to their most popular sweet potato cupcake.The company has permits to sell in D.C. and Montgomery County.

“Food trucks are really new. Especially in D.C., they are coming out one after another,” DC Love Bites co-owner Tima Hawes said. “A lot are not branching into Montgomery County. That’s why we want to expand.”

Hawes founded the business with her mother and fiancee. So far, they have been targeting D.C. but have been stopping in Silver Spring once a week.

“We want to get into Silver Spring more often,” Hawes said. “Right now, we are focused around the [National Oceanic and Atmospheric Administration] building and Discovery building, but we want to branch out to different areas.”

Go Fish!, a new seafood truck, will be making the rounds in the downtown Silver Spring area by the end of the month, said Missy Carr, who is with Go Fish!. The food truck has a dual mission, Carr said. It will sell ready-to-serve items during lunch hours, such as salmon burgers, crabcake sandwiches and salads with grilled shrimp. And in the evenings, it will park near Metro stations and sell marinated, ready-to-cook seafood items, Carr said. This way, people on their way home from work can grab dinner and cook it at home.

Carr said she has been talking to the Sub-Urban-Bros and Tops and is planning to meet up with them once they get the truck running. She said they are hoping to target high-occupancy office buildings like those in North Bethesda and Rockville.

“I think it seems like a group where people are welcoming,” Carr said. “I think it’s one of those things where we all need to work together. It seems like everyone is willing to do that. We all sell different products and draw a bunch of different people.”

Carr said that while she feels like Montgomery County is an untapped market, it will take some strategy for food trucks to succeed in the suburbs.

“I think the trick with Montgomery County is going to be trying to find a large number of people for a shorter period of time,” Carr said.

Carr said she plans to make stops in Silver Spring near the Discovery Communications building and meet up with other trucks on Colesville Road and Georgia Avenue. She said she thinks the key to success for food trucks in downtown Silver Spring is offering different food than the options already available.

“I think we will be OK in downtown Silver Spring,” Carr said. “There are a lot of shops and retail there. … There is a Metro station there, which is a good evening spot.”

Carmen’s Italian Ice & Cafe is also looking to move into Silver Spring. Owner Jason Mandler started the business around 10 years ago. It has a storefront in Rockville that sells Italian ice, gelato, coffee and frozen custard. It also has a fleet of ice cream carts throughout the county as well as two fully equipped trucks. One only sells iced desserts, which they just started using in August, and another, which they have been using for around six years, also sells hot dogs and a few hot items like pretzels and coffee, Mandler said.

“We have been doing the mobile stuff for awhile now, before it was hip as it is now,” Mandler said.