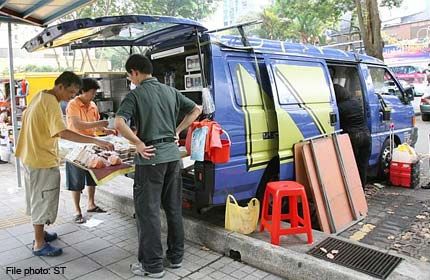 By The Straits Times | AsiaOne.com

SINGAPORE -Mobile food trucks could make a comeback in parks, despite failing to take off in previous attempts.

The National Parks Board (NParks) is conducting a feasibility study on providing another dining option for park-goers, whose choices currently include buying snacks at kiosks and dining in restaurants.

Its deputy director of lifestyle business Tan Lai Kheng said it is looking to bring the food trucks back to cater to the needs of park users.

“We are currently exploring the feasibility of having mobile food and beverage vehicles in some parks,” she added, but locations have not been confirmed.

The Straits Times understands that NParks has met owners of several big-chain restaurants.

Sources said the food trucks are likely to be stationed in parks all day on weekends. Facilities like electrical sockets will be provided, they added.

NParks first allowed food wagons in two parks – Bukit Batok Park and Changi Beach Park – in 2003. But this was discontinued in 2004 “as it was not sustainable”, said Ms Tan.

Participants in another similar venture in 2003 – by the Urban Redevelopment Authority – also found the going difficult.

The URA gave out 33 permits under its food-van scheme with rents for spots at five carparks islandwide ranging between $190 and $280 a month. Vendors could operate only from 7am to 10.30am daily.

Four vendors dropped out even before starting business, with more withdrawing from the scheme over the years. Now, only one vendor – at the Kallang Road carpark – remains.

The concept of eateries on wheels is believed to have originated in the United States in the 1800s as an invention by cattlemen looking to feed herders moving cattle from one part of the country to another. By the 1980s, countless food trucks had sprung up to feed night-time workers at construction sites.

Top chefs like Zak Pelaccio have earned acclaim with food trucks in the US. The trucks are also appearing in France and Australia.

In Singapore, Mr K.F. Seetoh of Makansutra said he is studying the viability of operating food trucks.

The founder of Makansutra, which develops culinary concepts, publishes food guides and runs eateries, said many factors have to be considered, including garbage removal, grease control and safety regulations, as well as water and electricity supply.

His opinion is that past attempts at operating food trucks here flopped due to three factors: high costs, overly stringent rules and the lack of an overall vision.

“Back then, the food trucks sold nasi lemak and fish balls and were parked next to construction sites. They need to pick the right vendors,” said Mr Seetoh, who is in his 40s.

The Government, he added, could also look into subsidising the expense of setting up food trucks, which cost from $100,000 to $200,000 to buy and modify. “After you have factored in all the costs, the prices of the food you sell would be too ridiculous,” he said.

Vendors have to submit an application to the National Environment Agency with details such as operating schedules and a layout plan of the food wagon.

They must also consult other agencies, including national water agency PUB for the installation of a grease trap, URA for site-use approval and the Land Transport Authority to convert a vehicle into a food truck.

One restaurant operator – Mr Adrien Desbaillets, co-founder of Salad Stop! – is thinking of buying a second-hand vehicle to convert into a food truck. The 31-year-old said he would consider operating in a park but added the food truck could also be rented out for events and functions. “Such trucks could help raise awareness for the brand. If someone books a salad bar for a barbecue, we could just drive a truck up,” he said.

Full-time national serviceman Faraaz Amzar, 19, who goes to Bishan Park once a week. said the trucks could offer different items throughout the day. “They could also sell items not commonly available elsewhere, like fried Mars bars,” he said. “There could be more good dining places there, especially at night. Maybe a cluster of food trucks with some seats. That would create the right atmosphere.”

Toronto, CAN: Toronto’s Street Food ‘Provincial’ Compared to Other Cities