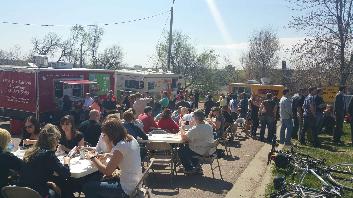 Several food trucks were easy to find since they were all parked in one location for the first ever Food Truck Friday hosted by the owners at the bakery.

Hordes of hungry people gathered in downtown Sioux Falls today for food truck Friday at The Bakery.. Relimax employee Bryan Roark brought his appetite and says he was excited to see so many food trucks in one location.

He says, “I guess I’m a foodie. So I love this kind of stuff. I think it’s great there’s something like this going on in Sioux Falls”.

Seven trucks drove up for the event bringing a wide range of food from barbecue to Cajun cuisine.

Roark took the time to show off his bowel of Jambalaya, “Sausage maybe a little pork and chicken and rice and good and spicy”.

Food Truck Friday was organized by the founders of the bakery…The business about to open it doors at this location.

They say they had no idea so many people would come out.

Co Owner, Brian Rand told us, “When we first came up with the idea we seriously thought we might have 50 and now, I don’t know what the numbers are on this, but it’s a wonderful thing”.

Rand says the point of the event is to get the community to come together.

Rand says,”The idea of Food Truck Friday and other event we plan to do once we’re open is really just to continue to build community and bring Sioux Falls together in a fun, creative atmosphere”.

And Bryan the foodie, thinks this is a perfect way to do just that, exclaiming,”I think it’s great”, as he prepared to take another bite.