By Robert Pierce  | Leader and Times

A business that grew out of the couple’s love for Vietnamese food now has a new home in the former location of one of Liberal’s most popular restaurants.

Earlier this month, Kevin and Gabrielle Lam  officially ditched the food truck that served as their restaurant, Lam’s Vietnamese Cuisine, for the walls that until May were home to Billy’s Blue Duck BBQ in the Plaza in north Liberal.

The Lams had operated the food truck for about a year and a half, and while both she and Kevin enjoyed the mobility and fast service of a food truck, Gabrielle said the couple was outgrowing that means of getting people food. She said there were other factors that played a part in opting for a brick and mortar restaurant as well.

“The winters are really harsh here compared to some of the other places where food trucks are popular,” she said. “Being able to find a small location that still allows us to be a quick service restaurant was what we were looking for, and whenever this spot opened up, we just figured we would grab it before anyone else did.” 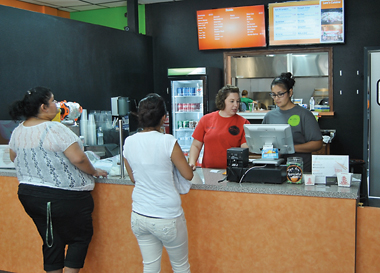 The Lams actually began their lease in June and spent most of June and July remodeling in preparation for the August opening.

Gabrielle said currently, Lam’s offers most of the same items that were available with the food truck, with a few exceptions.

“Instead of having certain dishes on certain days, we have our whole entire menu every single day,” she said. “We launched one new dish. It’s called Bo Luc Lac. It’s a shaken beef. We serve it with a ball of rice and a side salad. That’s also served every day. Here in the next couple of weeks, we are going to start doing a sticky rice with chicken. That will also be new to us.”

In addition to dining in, Lam’s likewise offers other means to get food to its customers, according to Gabrielle.

“Catering is just about the same,” she said. “We can still cater large or small parties. We can also deliver. We will be launching online ordering shortly through our Web site.”

Lam’s can be found online at www.LamsVC.com and on Facebook at LamsVC.

Gabrielle said the couple’s love for Vietnamese food was partly due to Kevin’s heritage.

“My husband is Vietnamese,” she said. “His parents were born and raised in Vietnam, and he was born in Liberal and raised in Liberal. We’ve always kind of cooked. Whenever we went to college, our house was always the popular spot for all of our friends to come and eat.  In Hays, there’s not a big selection of Vietnamese as well. That was usually the dishes we chose. Whenever we moved back to Liberal to be closer to family, it was just a good opportunity.”

Gabrielle said the Lams had looked at other locations before deciding on the former Billy’s location.

“We really wanted to own our own spot, but that’s not an option right now,” she said. “We found somewhere that was centralized. The south side of town was great, but being central kind of opens us up to south and north. We like the area in the Plaza because we get a lot of other customer bases that maybe weren’t able to make it to the food truck. There’s a lot of great traffic here.”

Lam’s is open 10:30 a.m. to 5 p.m. Tuesday through Saturday, and while they may do so in the future, Gabrielle said she and Kevin are not looking to extend hours at this time.

“We’re just trying to keep up with our demand right now,” she said. “In the future, we might look at adding more dishes, stir fries. As of right now, we’re going to keep our hours 10:30 to 5. We do accept call in orders, so if you’re short for time, you can call it in.”

Gabrielle said thus far in just less than a month of operation, business has been going very well.

“Our only problem is it’s hard to keep up because we’ve gained popularity in our new spot, but my staff works really hard,” she said. “We’ve got really good employees, so we’ve been doing really good.”