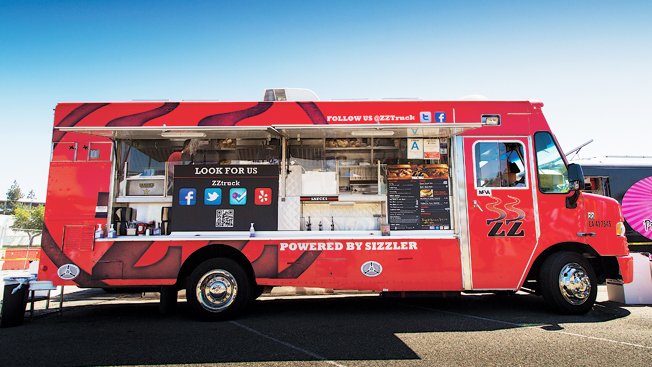 To die-hard fans, “corporate food truck” may be an oxymoron along the lines of “caffeine-free energy drink” or “eco-friendly SUV.” Food trucks are in vogue precisely because they are an antidote to corporate chains, with their dull, processed and, more often than not, unhealthy eats. Food trucks became hot by offering fresh, artisanal and sometimes daring fare in limited quantities at select locations—status dining for foodie elites on a Groupon budget.

And yet, given its explosive popularity and intrinsic marketing value, one could hardly expect the food truck to stay trapped in such a narrowly circumscribed paradigm.

“Food trucks are like having a roaming billboard in whatever city you’re in,” says Dennis Suh, operations director of Mobi Munch, a Los Angeles-based company that leases and sells custom-configured food trucks. And these aren’t merely billboards but highly interactive ones, dispensing comestibles, aggregating customers and enlisting target audiences in their sales pitches.

To that end, Twitter has, of course, been a key partner of food trucks, as NBC demonstrated at SXSW with its “Munchie Mobile” promotion. Long before Ann Curry’s dis-astrous heave-ho came to dominate headlines and blogs, the network managed to get tongues in Austin, Texas, wagging about Today—a not inconsiderable feat considering this is a half-century-old, gray-viewer-skewing network television program we’re talking about, being hawked at a gathering devoted to uncovering the next Pinterest.

The secret formula: hot breakfast first thing in the morning for all those bleary-eyed influencers and their followers.

The network served some 10,000 compulsively self-documenting media professionals more than 2,500 free “breakfast bombs” and 45 pounds of bacon jam over the course of four days, urging them to publicize it via Twitter, Foursquare, Instagram and outlets such as USA Today and NPR at a time when the eyes of media, tech and entertainment were on Texas. The result: 6.2 million impressions via Twitter alone, according to Jen Brown, digital director of the Today show.

Aside from such promotional one-offs, it is national chains suddenly getting in the game that is reshaping food truck mania.

It has been a learning process.

When Sizzler rolled out its truck last year, executives at the 54-year-old steakhouse chain felt that one way they could stand out from all the culinary upstarts hustling kimchi quesadillas on the streets of Los Angeles was to emphasize service. While well-meaning, it also served as evidence that the suits did not necessarily appreciate what had spawned the food truck rage to begin with.

“We’d see all these long lines at food trucks and talk about how we could capitalize on that by getting our food out in a few minutes without compromising quality,” says Chris Rahder, who focuses on nontraditional business development for the chain.

But while reducing average waiting times is the holy grail in the world of fast-casual and quick-service restaurants, in the trendy world of food trucks, Rahder would come to realize, slow service is a feature, not a flaw. Indeed, a long line suggests that whatever menu items are for sale are not only in great demand, but also worth waiting for.

“At these food truck festivals, that’s what people look for—the trucks with the longest lines,” Rahder explains. “So you’ve got [operators] purposely slowing down just to create that line. It’s a game.” (In Forbes, Olmsted saved special vitriol for the festivals. “When grouped together in lots … food trucks become an outdoor version of a long-standing American culinary tradition: the shopping mall food court, and nothing more,” he griped.)