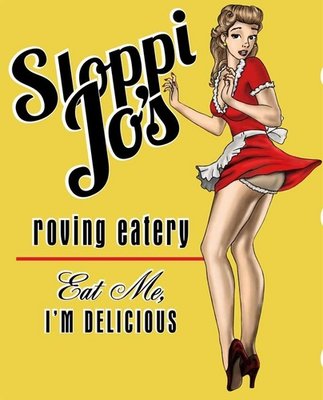 Sloppi Jo’s is having a practice run today.

Which means only one thing: free food!

With a menu designed around Hatch green chiles, the roving food truck is Sloppi Jo’s first in Las Vegas.

Stop by to say hi and pick up a a breakfast burrito, a green chile cheeseburger, or one of many other green chile delights.

What I consider to be the biggest story in the Las Vegas food scene in 2010 is the advent of gourmet food truck. There are a variety of players offering foods varying from sliders to shaved ice to Hawaiian foods, though there is still room for some more types of cuisine. As 2010 comes to an end, we get our final entrant into the fray in the form of Sloppi Jo’s.

Now Sloppi Jo’s moniker comes not from the the sandwich (though there is one on the menu) but rather as a play on the owner Jolene’s name. So take note – this is not a Sloppy Joe-related truck but rather a truck whose menu makes use of a single ingredient in a variety of ways – Hatch green chiles.

Hatch, NM is famous for its green chiles and Sloppi Jo’s has ordered them en masse in order to serve the masses. Jo’s menu has six item

s on it and we were lucky enough to get a sneak preview of three.

First on the menu was Sloppi Jo’s green chile stew. This is a very traditional New Mexico preparation and was chock full of succulent roasted pork, potatoes, and of course green chiles. The stew will be hit a during Vegas winter months and is not for the faint of heart, though Jo tells me she’s going to try to temper the spiciness of her dishes. Irregardless, this is a hearty meal that is well worth the spiciness.

The second dish was the Sloppi Jo, marinated pork top with a fried egg served alongside tortillas and pickled onions. This eponymous dish is almost obligatory since some people will indeed come looking for a Sloppy Joe, but is by no means an afterthought. First off, the combination of pig and eggs is ALWAYS a good one – this is a never-fail combination of tastiness that Sloppi Jo’s hits perfectly. Secondly, rather than having the messiness of the soggy bun you’re presented with piping hot tortillas while the pickled onions give the dish a bit of textural balance not normally found in Sloppy Joe’s. The sauce itself has the right amount of kick and exudes bold flavors that are sure to delight. This’ll be a favorite soon and is a dish that can be eaten throughout the year. 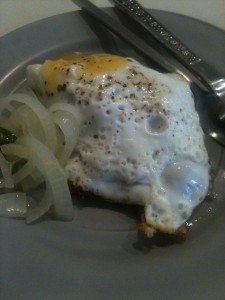 The pièce de résistance is the green chile burger. Once again, this dish forgoes the traditional trappings of a bun by wrapping the burger in a tortilla instead. The burger itself is topped with both green chiles and pepper jack cheese and the combination provides a nice gooey center to the handheld treat. The portability of this dish will most likely make it the most popular selection with the on-the-go crowd.

You can taste these dishes and the rest of Sloppi Jo’s offerings this week at their grand unveiling. Sloppi Jo’s will make their public introduction alongside Fukuburger at the 6PM grand opening of 9037 Salon at 9037 W. Sahara on Thursday, December 30th so be sure to check it out! You’ll be glad you did!