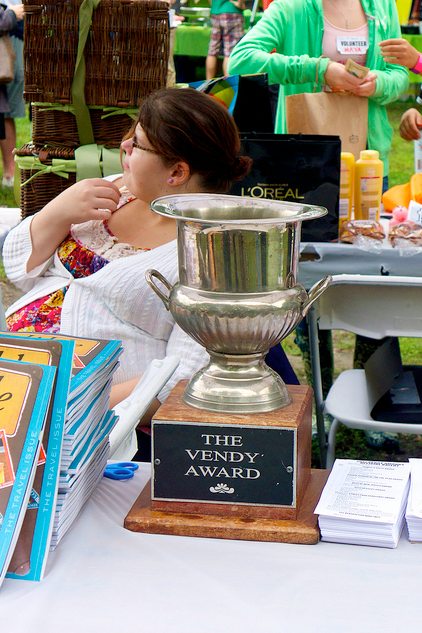 By Jen Chung | The Gothamist

With only a few days to contemplate the finalists battling for top honors at this year’s Vendy Awards, crowds of foodies descended on Govenors Island yesterday to feast on the vendors vying. In the top category, Solber Pupusas, Eggstravaganza, Chimichury el Malecon, Souvlaki GR, Trini-Paki Boys Halal Food and Sam’s Falafel were all vying for the Vendy Cup. And the winner? Solber Pupusas!

Cesar Fuentas said Solber Pupusas was “Representing anyone who has tried hard and started from, I guess, the very bottom, literally with an old van, with a table with second, third-hand wares. And coming up to this and being loved like this it’s human, it’s history.”

Rookie of the Year was Korilla BBQ, which avenged getting kicked off The Great Food Truck Race. The Queens and Long Island natives said, “We’re all winners here!”

Wooly’s Ice won best dessert—the shaved ice operation, which located 79 Elizabeth in Chinatown—thanks supporters last night and Tweeted this morning, “Had a dream I was king, I woke up, still king. #vendyawards #bestdessert #bessert?” It wasn’t a dream—for many people, it was their introduction to Woolys and, as one happy customer put it, their epic desserts, like Maker’s Mark ice, nutmeg, and bourbon maple syrup.

Some additional notes, from our own Jamie Feldmar: