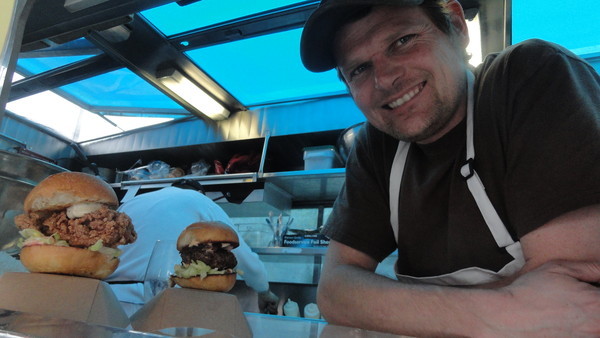 As if miraculously ordained, the skies cleared just long enough for crowds to dance to live music and chat their way through Sonoma’s inaugural Food Truck Friday, held at Sebastiani Winery March 25.

And of course, there was plenty of eating to be had by the enthusiastic participants.

“It’s hard to think of anything Sonoma needs, but if it needs anything it’s this,” said Kori Schake.

For now, organizers intend to host the Food Truck event in Sonoma on the last Friday of every month.

“I know the issues with restaurants being worried about their business, but once a month doesn’t hurt people – in my opinion,” said James Ledwith.

The event will make its way through the Sonoma Planning Commission next month, to obtain a long-term permit.

“I’ve already ran into three council members and the entire Planning Commission,” said Sonoma City Councilman Ken Brown, who had observed earlier this year that the event — which started in Napa — “could never work in Sonoma.”

But, Martin added, the parties were meeting to discuss the issues and he hoped to have an announcement soon.