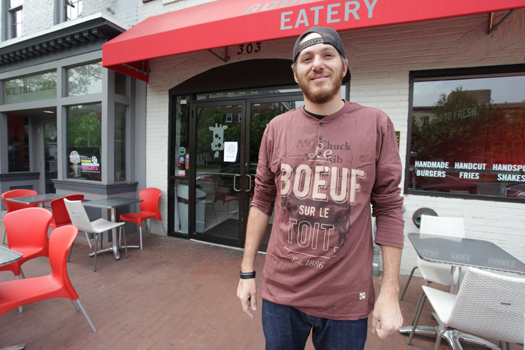 “I grew up around restaurants and food. My parents were restaurateurs and we moved between Montreal, Europe, and Florida for their work. As a kid, I didn’t want to go into the business. I grew up seeing my family work the long hours and weekends, and I was more into marine biology and film. I tried pursuing those things, but I eventually got sucked into the restaurant business. At first, I was resentful because while all of my friends were out on jet skis in Florida, I was washing dishes for my parents. But, those experiences molded me and made me who I am.

“After working for my parents, I took off to go travelling and then went off to pursue cooking in New York. I was doing well up there and making a name for myself. At the same time, I was dirt poor and sleeping in any girl’s bed or couch that I could find. When Top Chef came around, it was an incredible opportunity that really helped to launch my career. Honestly, Top Chef afforded me the opportunity for everything that I have now. At the same time, the show also put a lot of pressure on me. Before this, I was just a kitchen rat making a name for myself in New York. I could be elusive and people were not as critical. Once you get on TV, you get amazing opportunities, but also you open yourself to criticism. That was okay for me because I keep my family around to keep me grounded and help me stay on point.

“After the show, my sister found the location for Good Stuff and called me up in New York and told me to get my ass down here. I was thinking about doing something on my own in New York City, but my parents wanted to get back in the business. We hadn’t all lived in the same city for many years, so we decided to give it a shot here in D.C. We came up with Good Stuff because my family had a hamburger place at the World’s Fair in 1992 in Spain. We got the name from my grandfather. Whenever we were together and something exciting happened, he would give a hockey pump and say, ‘ That’s Good Stuff!’ We wanted to dedicate the restaurant to him after he passed away.

“When I used to visit my sister here, there was such a huge food void in this city. I remember coming to visit her and seeing that the food culture was so bad here, especially on this block where Good Stuff and We, The Pizza are now. Everyone was concentrating on politics and it seemed like food was not that important. Obviously, things changed in part due to the new administration. The Obamas showed that they were interested in local food and brought a lot of young people to the city. That did a lot for the food culture here. Many chefs came here and then more wanted to come. The food scene has really developed in the last four years. To me, H Street and U Street look more like Brooklyn every day.

“With time, I have really come to love this city. New York is over saturated with too many concepts. You may be popular for two weeks, and then there is a new trend. Here, I opened one restaurant, Good Stuff, that developed my entire career. It is nice to be in a second-tier city where you can be a big fish in a small pond. And, because this is Washington, you can also feel like you can help change the world and impact the community rather than just flip burgers. Here, I am involved with Michelle Obama’s food initiatives and can help local kids and schools learn about food. I never would have had the time or opportunity to do that in New York.

“After a few years here, I am finally finding balance in my life. When I got here, all I did was work. Now, I can take some time and enjoy the city and walk around and see the place. Doing that helps me love this city a little more every day.”

Spike Mendelsohn is the Chef/Owner of Good Stuff Eatery and We, The Pizza.