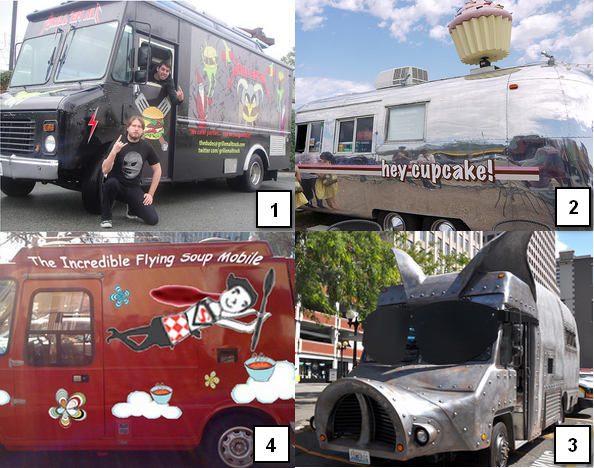 Some food-truck proprietors have gone beyond the norm with design, creating totally wacky vehicles from which to dole out their grub. And we don’t just mean a friendly coat of paint or a cute awning – some sport elaborate murals and sculptures, and one even resembles the animal served on its menu. Which one of these crazy-looking trucks is your favorite? Let us know in the comments.

Chef Ryan Harkins and Matthew Chernus rocked it hard by winning The Great Food Truck Race with their music-themed burgers like the Dee Snider (peanut butter, jelly, bacon and sriracha) and the Hannah Montana (a basic, all-American burger). But frankly, we’re sure it also had something to do with the heavy metal–themed truck they cook in. Designed by Andy Anderson, it features Gwar-esque images of burger warlords, wizards and flaming fries. “We basically just told him we wanted the first truck to look like some ripper’s party van,” said Chernus. “Andy is a very talented artist, a ripping bass player, and it’s like he is from the planet Heavy Metal.” And so is the truck.

One of the coolest food trucks around comes from this Texas chain of perky cupcake stands. It’s a chrome Airstream trailer outfitted with a giant cupcake on top, kind of like an antenna. Does it send out signals to the sweet-toothed men and women of Austin? Perhaps, or maybe it’s just their fun selection of tiny cakes like the Sweetberry, a berry bomb of pink cake and strawberry-infused cream cheese frosting, or their Michael Jackson flavor, a clever color fusion of chocolate cake with white cream-cheese frosting. The cheese doesn’t just stop at the toppings; they have a whole subplot of adorable cartoon cupcake characters called Mr. Spriggy and the Cupcake Crew, and a fanciful story (with a surprisingly well-produced video).

If you can’t tell what Maximus Minimus’ specialty is by looking at the truck, you must be blind. That’s right, this metal pig serves swine in the form of a pulled pork sandwich, which you can get either hot and spicy or sweet and tangy. The truck has been running in Seattle since 2009 and was created by its owner, Kurt Dammeier. Designer Colin Reedy took Dammeier’s idea and made it into a real, functioning pig truck that doubles as a solid metal sculpture. “It’s a pig because he thought it might be entertaining to serve pork from a pig,” said spokeswoman Julie Riendl. But don’t be fooled – though it appears as an armored mobile, the meat inside is tender and sweet.

This tiny, red truck (or is it a van?), decorated with cartoon clouds and peace signs, serves up bowls of delicious soup with gusto. Owned by Jennifer Levison, it’s a mobile extension of her quaint restaurant, Souper Jenny, located in Atlanta. Chef Jessica Hanners whips up daily batches of stews like chicken tortilla, vegan curried chickpea and classic broccoli cheddar. Bonus: you can order it for private events or check out their specials each Saturday at the Peach Tree Road Farmers Market.

Philly chef Daniel Tang has received plenty of attention for his truck’s scrumptious desserts like crème fraîche cheesecake with blueberry compote and luscious French macarons flavored with salty caramel, rose and Meyer lemon. But contrary to popular belief, it’s not just what’s inside that counts, it’s the outside too. The vehicle’s mural depicts a dainty red umbrella, a soft blue sky and a palace in the distance – it’s magical realism gone food truck! “We basically wanted to convey our idea of what desserts are like for us,” says Franklin Shen, one of Sugar Philly’s partners; “With that first bite, it’s like you’re transported to another world where your worries just melt away. Why else would Willy Wonka and the Chocolate Factory be so popular?” Why indeed.

It shouldn’t surprise you that this truck based in Portland, OR, utilizes all natural and organic ingredients in its salads, soups and sandwiches – rather, it’s the way it looks that’s a shocker. The food is served out of a mini-trailer, like the kind you pull behind your car to take camping. Owner Kristin Nekovar also went for a trailer vibe inside, installing reclaimed cabinetry. Just don’t expect to find any Hot Pockets or Tang on the menu.

True to its name, this slick, shiny Seattle truck with a skillet stenciled on its side speaks of brand-new pans and clean counters, the opposite of chef Josh Henderson’s messy menu of chipotle mac ‘n’ cheese, burgers, gooey poutine and his specialty, bacon jam. It’s an Airstream done in high style, a nice change from the boxy trucks most chefs use to peddle their goods.

Forget the taco cart, give us a bus full! If you live or visit Tampa Bay, FL, that’s exactly what you get at the aptly named Taco Bus. Once upon a time, the vehicle traveled the country serving its grilled steak, pork marinated in achiote, roasted poblano pepper with cheese and other delicious taco flavors. But 20 years ago, owner Rene Valenzuela finally decided to settle down, parking her two buses permanently in the Sunshine State (the other one’s in St. Petersburg). So while this isn’t a food truck in the literal sense, it makes our list simply for its charmingly ramshackle look, complete with festively decorated awnings, plus this awesome sign: “Broken English Spoken Perfectly.”