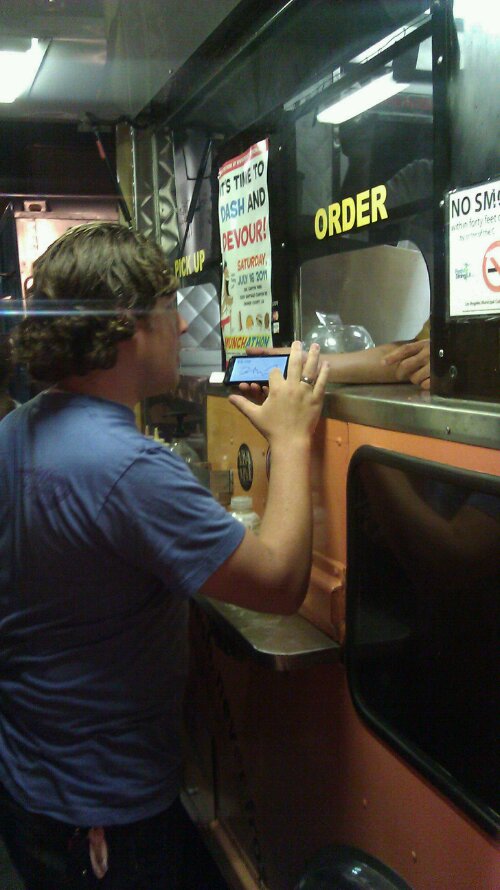 One Square mobile application: free. The credit card reader to go with it: free. The technology to process MasterCard, Visa, American Express and Discover cards on a smart phone or iPad: priceless.

Square, the San Francisco startup, recently raised $100 million to change the way people handle business transactions. Now, anyone from a cab driver to a house-call doctor to a produce purveyor at the farmers’ market – even a couple holding a yard sale – can accept payments on their mobile devices. The technology is a boon for many fledgling entrepreneurs – particularly small and mobile food businesses – who found the traditional way of processing credit cards either cost prohibitive or unfeasible.

It all started in 2009. Jack Dorsey, one of the founders of Twitter, was talking to his childhood friend, Jim McKelvey, a glass blower who had just lost a $2,000 sale on one of his sculptures. A woman had walked into his St. Louis shop, fell in love with the piece and wanted to buy it. She could only pay by credit card. McKelvey was set up to only take cash. So, he kissed his big chunk of change bye-bye.

The two men commiserated over their smart phones. Then McKelvey and Dorsey, a software engineer, had an epiphany. Why not invent an app that accepts payments on an iPhone, iPad or Android phone? They went into business.

“We have fully functional computers in our pockets,” said Keith Rabois, Square’s chief operating officer. “It’s transforming every industry. Why not the way we make payments?”

Once the free application has been downloaded, a reader is mailed to the recipient (it can also be purchased for $9.95, with a $10 rebate, at Apple, Radio Shack and Best Buy stores). The little gizmo plugs into the headphone jack of a smart phone or iPad and is used to swipe credit cards.

Since Square was founded in 2010, the company has shipped 750,000 readers to merchants and wannabe merchants. About 65 percent of the businesses using Square are mobile in some way, Rabois said. About half the transactions are made with debit or credit cards.

Square, which is working with Chase bank, cuts and mails a check to the seller just hours after a transaction is made and takes a 2.75 percent cut, Baynes said. As of August, the company was processing $4 million in payments a day, and it estimates that by the end of the year it will have done a total of $2 billion. With that kind of volume, it has been able to work out a deal with credit card firms to charge merchants a flat fee for accepting MasterCard, Visa, American Express and Discover, Baynes said.

Typically, credit card companies base their fees on the credit rating of the merchant. Some, such as American Express, have been known to be more expensive than the rest. Sometimes the cost is too much for a new business.

“To rent the terminal alone was going to cost me $40 to $50 a month,” said Maricar Lagura, co-owner of Spin City Coffee, which opened in San Francisco’s Noe Valley neighborhood a little more than a year ago. “Our place is really small. We didn’t have a budget for anything, and were pretty much running on hope and prayer.”

Lagura and her partner had decided to be a cash-only business until a Square representative contacted her. Lagura said he didn’t have to get too far into his sales spiel.

Now, credit card sales are 35 to 40 percent of her business, she said, adding that she plans to use Square when she puts her coffee truck on the road next year.

“It’s a no-brainer,” said Lagura, who also uses Square Register on her iPad, a full point-of-sale system that includes inventory tracking and ways to publicize her menu and location information. “This is going to change the world.”

Venture capital firms agree. Kleiner Perkins Caufield & Byers, Sequoia Capital and Khosla Ventures are key investors in the startup, which is headquartered in The Chronicle building.

Over the summer the company introduced Square Card Case, a mobile app that enables customers to start tabs with local merchants, store digital receipts and search nearby Square food businesses and their menus.

“The ultimate goal is to reinvent both sides of the counter,” Rabois said. “We want to create a system in which making and receiving payments is less like going to the dentist.”