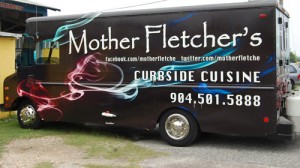 Before franchise restaurants, gubernational fast-food chains and Wal-Mart ruled the world, people often purchased goods and services from savvy merchants who roamed the countryside hawking their goods from the back of a wagon.

A national trend
Food trucks began receiving national attention after one called Kogi started tweeting its stops outside Los Angeles nightclubs a couple of years ago. Now food trucks across the country utilize social media to post their specials and locations.

In Charleston, owners have initiated a Food Truck Federation to help the trucks work together and ease operating restrictions.

There was even a show on Food Network called The Great Food Truck Race last summer.

But St. Augustine is lagging behind in this trend — forcing food-trucks to park on private property so they can’t roam around as in other cities.

Go north, new trend
In St. Johns County, mobile vendors can operate if they have a temporary use license, which costs $100. It allows venders to do their thing for three days, twice a month and limits operation to private property.

Gourmet food truck Mother Fletcher’s, owned and operated by St. Augustine residents Danny Forkasdi and his wife Dorothy, is beginning to feel the effects of only being permitted to work six days a month.

“As it stands, they will not let me work,” Danny said, taking a break from setting up shop at the Pecan Park Flea Market in Jacksonville. “Even though I have a business license, even though I’ve got all my licenses and inspections, I still can’t work in St. Johns County.”

Forkasdi and his wife don’t know how much longer they can hold out before they’ll have to move somewhere that’s more accepting of food trucks.

Before the Forkasdi’s got into the food truck biz, Danny worked for 32 years for a manufacturing company in South Carolina. After the downsized, Danny lost his job. So the couple decided to move to St. Augustine last year, after falling in love with the city 10 years prior. But Danny couldn’t find work in what he is trained to do. Cooking is Dorothy’s passion, so they tried opening up a brick and mortar restaurant, but it proved to be impractical.

Then they read about the food truck revolution and thought it was only a matter of time before North Florida embraced it. So they souped up a retired Frito Lay truck and Mother Fletcher’s was born — named after a now-closed club in Myrtle Beach.

It’s a joint venture with Ken Hinkle, owner of Sprocket’s Bike Shop, which is where the truck remains stationary until the city allows it to go mobile.

“We want to go downtown and serve people and do the typical food truck thing,” Hinkle said. “But that has proven to be very difficult in St. Augustine.”

Danny Forkasdi believes the City of St. Augustine can benefit from food trucks.

“We can pay our taxes just like a brick and mortar can,” he said. “We just want to work and pay our taxes in St. Johns County, not Duval.”
Currently, Mother Fletcher’s drives to Pecan Park in Northwest Jacksonville during weekends. Flea Markets, festivals and other special events allow vendors that meet licensing and inspections qualifications to operate.

Not welcome here
Sprocket’s Food Truck operates inside the city limits of St. Augustine. The city has different rules than the county, and Sprocket’s has the kind of permits that allow it to sell food on private property. Since it remains stationary on Sprocket’s Bike Shop’s property, it can vend food there, but it cannot go mobile.

Mark Knight, planning and building director for St. Augustine, said outside sales in the Historic District and food vending on streets’ right of way is prohibited. However, Knight said vendors can get a license that allows them to operate from location to location with permission from the property owner.

It’s a start, but St. Augustine’s food trucks want to go mobile and set up in vacant parking lots, offering their food to anyone who stops by. But the city says no.

You can’t open a business in a parking lot, Knight said, because then the vendors become “their own business.” Knight said if vendors want a vacant piece of property to sell food on, they will be limited by certain requirements, such as the requirement to have a bathroom within 100 feet and the requirement that the space be Americans with Disabilities Act compliant.

Like when Sprocket’s wanted to paint the outside of its truck. Martin said when the truck first got registered, they wanted to paint it, but the city told them, “You can’t advertise on a mobile truck.”

If vendors want to discuss a different approach, Knight said they can attend a development review process meeting.
“We meet every Friday morning, and we can go over the different options that they have,” he said.

Granting vendors free reign to vend, he said, would cause an influx of vendors and would hinder local restaurant’s business, which pay stationary property tax.

“It would not be fair to them,” Royle said.

Not all the established business owners agree.

Chris Froehlich, general manager at Harry’s in St. Augustine, said most businesses would probably say no to having a mobile vender nearby, but he has an open mind about it.

“It depends on how the city regulates it,” he said, referring to things such as health inspections, paying sales tax, and obtaining appropriate licenses.

Kelly Fitzimondes, a bartender at Harry’s shares the sentiment.

“(T)hey aren’t going to take away from what a restaurant offers,” he said.

Fitzimondes said if a food truck were to park outside Harry’s and offered decent food, he and other employees would eat it.

It’s not that they don’t like the food at Harry’s, Fitzimondes said, it’s that sometimes they want to eat something else, and so do other restaurant’s employees.

“We’re all ordering from each other,” he said, “I think there is plenty of customers to go around.”

They still don’t get it
But Danny Forkasdi said setting up in front of local restaurants is not what Mother Fletcher’s and other food trucks are all about.
“We wouldn’t want to take away from someone else,”  he said.

The Forkasdis said they work to support other entrepreneurs, not take away from them. Mother Fletcher’s buys its meat from Wester’s Choice Meats in St. Augustine.

“You got to try to support the local businesses,” Dorothy Forkasdi said. “Wal-Mart has just about put them all out of business.”
Moreover, Martin doesn’t think food trucks would deter much from the appeal of sit-down dining.

“More than likely, tourists are going to want to go out, sit down, and have a nice dinner,” he said.

County is anti-competition?
Forkasdi said he wonders why the fundamentals of capitalism don’t apply to food trucks.

“What’s McDonald’s going to do when Burger King decides to put up a restaurant right next to them?” he said. “But yet, they can tell us where and where we can’t go?”

The ordinances are simply outdated, he said. Mother Fletcher’s has done all it can do, in terms of licensing and inspections, just like any restaurant would have to, he said.

“The only difference between us and a brick and mortar is our restaurant has wheels,” Dorothy Forkasdi said.

What’s most perplexing, Forkasdi said, is why the county would issue him a license to operate, and then not allow it.

The license, he said, gives him permission to cook and sell food in the county, but it’s not a permanent mobile license. Lindsay Haga, development review director for St. Johns County, said the county has no process to render a permanent mobile-truck vending license, aside from a temporary use permit.

“We need to have a discussion about what the rules are,” Haga said.

She said food truck vendors could start building a proposal by using the temporary use permits to do what they want to do and then take it from there.

“So it wouldn’t be a long-term solution,” she said. “[But] could they dip their toe in the water and try it out.”

For now, it looks like the food-truck revolution will remain on hold here.

“Our goal is to prove that you can have good restaurant quality food come out of a truck, fast,” Martin said. “And I know that’s what Mother Fletcher’s is trying to do, too.”

But ask Danny Forkasdi what his  goal is and the answer you get is even simpler.

Sioux, IO: Starting A Revolution, One Smoothie at A Time