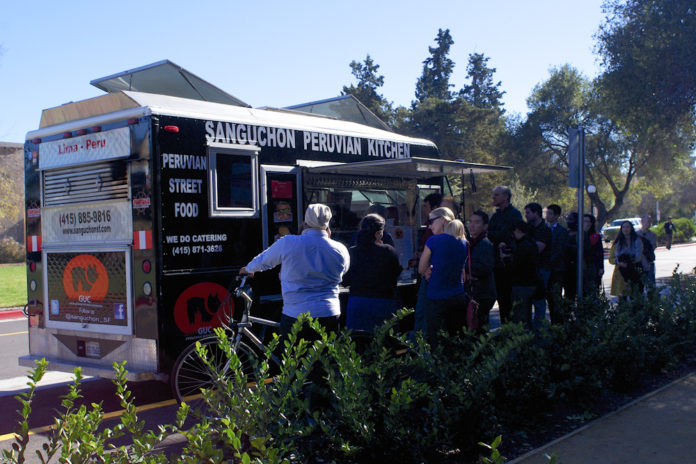 Mia’s Catering, a Mexican food truck, will no longer serve food on the Stanford campus as per the University’s new mobile food vendor policy. In response, community members have circulated a petition calling for the University to relax their food truck policy, which has already driven the popular food truck Net Appetit off campus.

On Monday, a Stanford sheriff asked Mia’s Catering owner Nimia Knuth to leave campus per the University’s new policy that all food trucks must operate under food truck management company Off the Grid.

Knuth had previously parked her food truck in front of Harold,next to Encina Hall, for about 15 minutes every afternoon, and she received a notice from the University before winter break informing her about how to contact Off the Grid to remain on campus. However, Off the Grid’s proposed schedule of 11 a.m. to 2 p.m. two days a week did not fit into Knuth’s scheduled route of construction sites on campus and other locations in Palo Alto.

Knuth only has about seven customers per shift at Harold, but she continued coming to serve a group of faithful customers, including students, staff and faculty. Graduate student Ariel Méndez was one of Knuth’s loyal customers.

“Her food was so good, and it was so affordable, that even on days when I thought I was having a really bad day, as long as I had some of her food for lunch, I felt like it wasn’t a total loss,” she said.

“I hate to leave them,” Knuth said. “It’s my business, but at the same time, I care about them too. Sometimes I’m very late to come over here because my construction holds me longer, and they’re here waiting for me.

“I love that, but at the same time, I don’t want to go against Stanford rules,” Knuth added.

“You’re losing a lot of variety and choices, both in terms of food availability, but then also in terms of geography,” said Lucas Puente, a political science graduate student.

In response to Knuth’s removal, Puente created a petition that aims to “end the University-sanctioned food truck oligopoly on Stanford’s campus.” A day after he posted the petition, it had over 120 signatures.

“[The goal of the petition is] just to gather as many names as possible and then show [Susan Weinstein], any decision-maker in that office or in the University more broadly that there are a lot of people who care about the availability of food trucks on campus and that they are not happy with the new status quo,” Puente said.

So far, Puente has tried to spread the word about the petition primarily through social media. He hopes to get at least 500 signatures before presenting it to Weinstein.

Both Puente and Méndez emphasized that Knuth has a spotless health record and operates in line with the University’s standards.

“[Knuth is] a really wonderful, caring person,” Méndez said. “She’s not someone that I would single out as a problem for the things that the policy is supposed to eliminate.”

Puente expressed optimism about the possibility of policy revisions.

“I haven’t talked to anybody who’s strongly in favor of the new policy and wouldn’t advocate at least some changes to it,” Puente said. “I think people want to see the consumers’ interests put first and not the University’s bank account.”