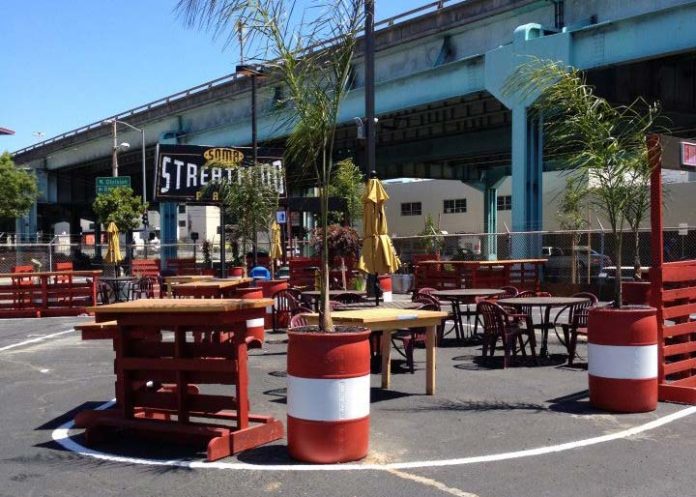 The next big name in the San Francisco street food scene? How about Carlos Muela, now that his Portland-flavored SoMa StrEat Food Park is ready to open its doors.

After a year of paperwork, Muela has transformed a pizza slice-shaped parking lot at 428 11th St. into a permanent space for Bay Area food trucks. In the next few weeks, a rotating lineup of trucks will start dishing up the best unpretentious food around:

“I have a huge list of food trucks e-mailing me every single day. When we first started this I only knew of a handful of trucks.”

Muela says he didn’t know what Off the Grid was when the idea for the food park first came to him over a year and a half ago:

“Basically we got the idea from Portland, Oregon.”

The biggest difference between Portland’s pod scene and Muela’s food park is that the trucks Portland’s pods are often static and don’t change. The trucks at SoMa StrEat Food Park are expected to rotate every day, if not every meal.

Although Muela owns two brick and mortar restaurants of his own, he admits:

“There is an issue between brick and mortar restaurants and the food trucks … We just wanted to create a unique space for the vendors to do business.”

Muela wouldn’t share any specific food trucks he’s got lined up for the opening, but he said there are over 50 trucks on his list. His job of selecting trucks for the upcoming soft opening could be difficult.

The soft opening of SoMa StrEat Food Park should happen in the next week and a half, with a grand opening going down in June.

For the curious, you could make an educated guess at the trucks waiting to fill the park by checking out SoMa StrEat Food Park’s Facebook page where photos of the repurposed space abound.