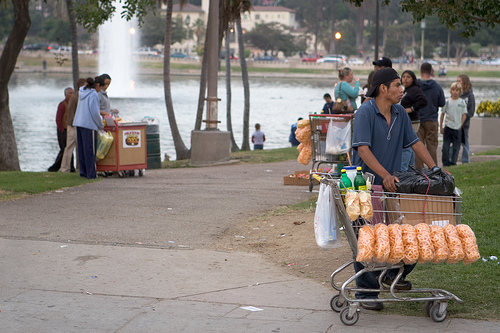 This year, the world has been captivated with the revolutions in the Middle East. Not surprisingly, the driving force behind the uprising has been the people themselves, leveraging the Internet and social media to communicate with each other and promote their message to the world.

It’s obvious that social media is spreading, and the Internet continues to threaten stubborn leadership and old paradigms.

In keeping with the theme of my last post on street vendors, I can’t help but think about how the digital revolution in the Middle East applies to the low-income neighborhoods here in America— neighborhoods where residents are just as disenfranchised and poor as in other parts of the world.

For me, economics plays a big role in the proliferation of poverty, and a successful marketplace is one where everyone is free to compete on a level playing field, is able to communicate freely with each other, and has access to efficient vehicles to get their product or message out to the masses.

Obviously, I think technology can help with that.

I was talking to a friend of mine who said, “Do you know that Newt Gingrich once said, ‘Do you want to empower the poor? Give them a laptop.’?” I shudder at the thought of quoting Newt, but damn, he’s right!

As some trendy food trucks in Los Angeles and other parts of the country are leveraging twitter to promote their products, why not develop ways to provide these resources to their original, low-income counterparts?

These street vendors are also trying their best to reach their customer base and sell their products with limited means. If the Kogi BBQ truck in Los Angeles is doing it, why can’t Rambo’s Tacos in Glassell Park have one?

Indeed, groups like IDEPSCA are empowering their constituents (mostly undocumented laborers) to use their cellphones to get organized and address challenges they’re facing. This type of work is relatively affordable and not only bridges the real digital divide in low-income communities, but connects people.

Twitter is only one small piece of the puzzle, but you can start getting really creative when you look at the array of technology that exists.

You can easily see how a street cart equipped with a GPS device can help them navigate new streets, or better yet, imagine a street vendor equipped with imaging technology that can map clusters of people, live?

In the end, a connected community is a powerful one. I think all of us deserve to have the ability to connect to each other.

Oh, and by the way, guess who started the Tunisian revolution? A street vendor.