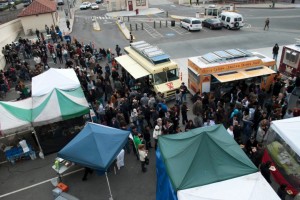 It will be cheaper and easier for street food vendors to get an operating permit in San Francisco.

By unanimous vote, the Board of Supervisors gave preliminary approval Tuesday to legislation sponsored by Supervisor Bevan Dufty that will allow operators of food carts and trucks to get annual permits from the fire and health departments rather than having to undergo several inspections a year.

In addition, the culinary entrepreneurs who operate at several locations no longer will have to get multiple siting permits. The cost of the permits also will cost less.

Representatives of the San Francisco Unified School District’s student nutrition committee raised concerns that the legislation would fray efforts to limit students’ access to unhealthy food. The legislation carves out an exemption from the city law that prohibits food trucks and carts from setting up within 1,500 feet of middle and high schools; concessions in city parks near schools would be OK.

Closing that loophole potentially would block concession opportunities in more than 100 city parks during the school year and stymie the Recreation and Park Department’s revenue plans.

However, in a move to alleviate the concerns over giving students easy access to junk food, Recreation and Park chief Phil Ginsburg said his department will collaborate with district officials and the principals of the adjacent schools to find suitable locations. He added that the department is committed to picking vendors who will offer ”healthy, sustainably grown and local foods.”

In other business Tuesday, the board, on an 8-3 vote, gave preliminary approval to Supervisor David Campos’ legislation that would require the planning and health departments to craft a citywide health services master plan that would guide land-use decisions when permits are requested for new hospitals and other health care facilities. Opposed were Supervisors Sean Elsbernd, Carmen Chu and Michela Alioto Pier.