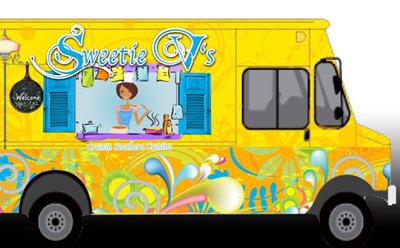 “Sweety V — that’s my grandmother,” says Gregory Rose, who owns the truck with his wife Sonya. “That’s what we’re naming the truck after. She born and raised in Texas, and was a wonderful cook. A number of the recipes and seasonings we are using will be with her in mind.”

The cuisine will be Southern with some Caribbean: meat pies, jumbalaya, fried chicken, fried fish.

“Our intention is to make sure it’s simple but very good,” Rose says. “We’ve got to make sure we do a very good job at bringing high quality food at a reasonable price.”

Their signature item is mac and cheese.

“We’ll have a wide variety: from our southwest mac & cheese to our Andouille sausage mac & cheese to our basic plain,” Rose says. “That’s what our focus will be initially. We haven’t finalized our menu at this point but we’re looking at rotating a number of different items, probably eight per day from a total list of 20-25 items.”

Rose left his office job to this; his wife has been a stay-at-home mom. He had entrepreneurial ambitions and wanted to be his own boss.

“I’ve always wanted to be an entrepreneur, and I had a passion for cooking,” he says. “This created an opportunity to do that. What better way to achieve both objectives than to have my own business and be an owner-operator.”

They’re finishing up their permitting process and are examining the Metroplex to see where they want to roost.

“We hope to be in Arts District and then will look at some areas both in the north part of Dallas but also the southern part — we live in Oak Cliff,” he says. “There’s still expansion in the market. We talked to Cajun Tailgator, they’re looking to expand into a restaurant and there are other food trucks expanding as well. Food trucks have been around California and New York, but in Texas, it’s still relatively new.”