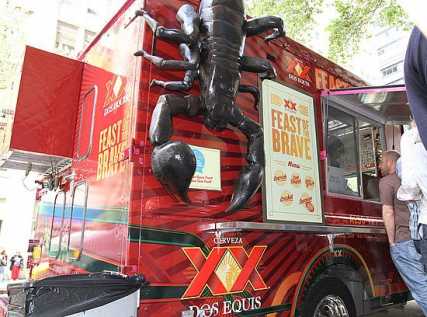 In recent weeks we have to admit we’ve been a little hard on the City of Sydney Council when it comes to their so-called urban innovation – like the controversial French style pissoirs installed for the late night incontinent. However last week they released plans for a radical new injection into Sydney’s rambunctious nightlife that we endorse 100 percent!

We’re talking roving food vans and the Lord Mayor has made it clear she would love to see Sydney throw open its curbs and gutters to the kind of mobile food trucks that characterise so many cities in the US and throughout Asia. It’s a corker of an idea, although one that’s not been greeted with much enthusiasm from the owners of the more stationary food outlets  like Harry’s at the Loo, who fear that their patronage will be poached by these nomadic marauders.

Apparently the new food trucks would be give carte blanche (forgive the shocking pun) to roam the streets of late night Sydney, targeting those areas where the rapid consumption of alcohol often brings on the midnight munchies and a king sized kebab encourages at least ten minutes of relative sobriety. Wave goodbye to the old style hot dog vendors with their slightly stale buns and clogged up sauce bottles, as a cavalcade of mobile food trucks descend on every pub and nitespot from the Rocks to Darlinghurst Road.

Competition will be rife as vendors selling everything from tacos and tortillas to takeaway tiramisu jostle for business like tow truck drivers at a five car pile up. Imagine the chaos, like a chase scene out of Mad Max, when a 100 or so of these garishly coloured food trucks barge and bustle their way up William Street, demolition derby style, to greet the 3.00am spill from the Cross’ jam packed pubs and clubs.

With so much food being consumed the Council may be forced into upgrading the current pissoirs into a series of “shittoirs” (if you will excuse our French). Either way the seagulls in Kings Cross will have a ball as Darlo Road is carpeted in a miasma of half eaten Indian curries and soggy souvlakis.

Perhaps the Council may be obliged to introduce some kind of regulation and one suggestion already mooted, to curb the vendor’s rapacious enthusiasm, would be to insist that all food trucks be pedal operated and totally eco-friendly. Teams of backpackers could be hired to pedal not only the vans from location to location but generate enough electricity to at least power a microwave and a set of lurid flashing lights.

Once the initial problems have been sorted we can envisage a time when the late night food cart will become as iconic to this city as the Opera House or the Bourke Street bicycle path. The annual ferry race on Australia Day will be scrapped and in its place a five hundred vehicle charge of backpacker propelled food vans down George Street, from Circular Quay all the way to Railway Square. Adults and kiddies alike will scream their support as their favourite junk food jalopy goes flashing by and as they sweep past the Sydney Town Hall, the Lord Mayor will appear, ceremonial  kebab in hand, to take the salute and issue the official endorsement of “Keep On Truckin’ Food Vans Of Sydney!”