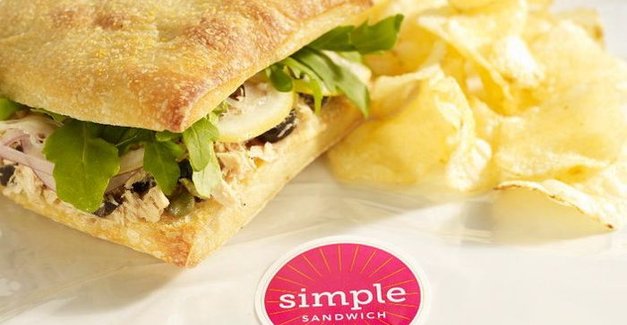 In a time when it seems like the entire city and culinary world has gone gaga for food trucks, no matter how good their wares are, it takes a lot to show culinary restraint. The city’s still not allowing actual cooking to go on inside these trucks, but that may change, and The A.V. Club is committed to staying on the cutting edge of the cutting edge. Thus, the street eat beat.

The street eat beat recently caught up with David Wojtonik, owner of the Simple Sandwich food truck that hit the Chicago streets earlier this year. Simple Sandwich recently wrapped up mobile operations for the winter, and Wojtonik was gracious enough to fill us in on his plans for behind-the-scenes development while the Simple truck rests.

The A.V. Club: You’ve retired the Simple Sandwich truck for the winter. What informed that decision?

David Wojtonik: The decision was multi-faceted. The mobile food scene of Chicago is very new, so people aren’t quite accustomed to chasing down their lunch yet. We got started in September and through September and October we did very well, but nearing the end of October we had a few bad days.

All the feedback from customers and the press has been great, Time Out Chicago and Steve Dolinsky have both spoken highly of us, but that being said, we’ve only had two months to develop our base, which may not be enough to last through the harsh winter weather.

AVC: Do you have any plans to establish new aspects of the Simple brand over the winter?

DW: We’re going to spend the season focusing on catering office parties and family occasions, which will hopefully expose us to different groups that will be more likely to check us out in the Spring. We’re also working on plans to set up a storefront in Chicago, which will take the food truck concept and place it in a more traditional setting. We’re still planning on maintaining a similar sort of prepackaged fresh food prepared daily that we’ve embraced with the truck.

AVC: Are there any new items you’re looking to add to your menu in the coming months?

DW: I’m hoping to get some fresh soups on the truck. We’re always keeping our eye on the truck ordinance, as well. We’d love to set up a sort of sandwich of the day, which would be a freshly prepared panini that would get pressed right after the customer orders it.

AVC: Other food vendors have mentioned potentially expanding the fleet beyond a single truck, using one to cover downtown and one to roam the suburbs, have you given any thought to this?

DW: Since we’re still not sure how truck number one is gonna do, we’re going to focus on developing that. We’d only consider a second truck after the first truck reaches capacity. We’re trying to be as risk-averse as possible.

AVC: Have you heard anything from friends in the industry regarding any new food-truck concepts to be rolled out?

DW: I’ve heard rumors of a macaroni and cheese truck, and I think the guys over at 5411 Empanadas, who work out of Kitchen Chicago, have already applied for their license. I’ve also heard that Rick Bayless was looking to get a taco truck off the ground.

The way I see it, the more trucks, the better. I feel like food trucks might need to hit a critical mass before the public begins taking it seriously—there’s a huge advantage to having more of us in the game. If people leave their office for lunch and see three food trucks over a few blocks, it’d be more effective than seeing one here or there every few days.

DW: I’m obviously very fond of my product—I truly love it—but if you took Simple Sandwiches out of the mix, it’d probably be a tie: First is the banana bread pudding from the Happy Bodega truck, and second would have to be something from Phillip Foss’ Meatyballs truck, probably the Bouilla-Balls.

Honestly, all the food I’ve had from Chicago trucks has been good. It’s nice to see good food on the streets. Hopefully we’ll see 10, 20, 30 more trucks out there in the next few years.