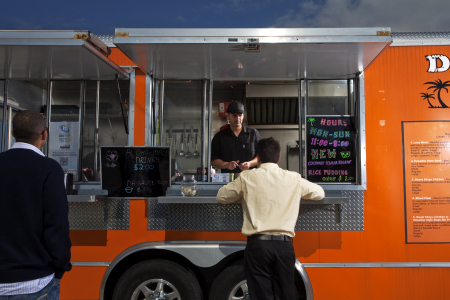 Anyone who has spent time in Hawaii will recognize the name of this brightly painted food truck and the simple culinary gems that emerge from it.

That doesn’t mean it’s a breeze to explain.

“Da kine” (rhymes with sign, as in “the kind”) is the most common Hawaiian pidgin expression, meaning just about anything. I first heard it in the late ’60s when a Hawaiian kid pointed at something and said, “Hey, gimme da kine.” Da kine? “Ya know, brah, da kine ting.” It’s a handy substitute when you can’t think of the right word. And it also means the best, as in, dat shoyu chicken was da kine!

The food may not be much easier for mainland newbies to understand.

Da-Kine doesn’t serve indigenous Hawaiian food — poi, lau-lau, poke — but what people in Hawaii call “local food.” That means mostly marinated meats and carbs — chicken, thinly sliced steak and Korean-style short ribs, with a scoop (or two) of white rice and a mound of cold macaroni salad. There’s also loco moco, a hamburger patty on a scoop (or two) of white rice, with brown gravy and topped with an egg (fried or scrambled).

It’s all ono (Hawaiian for delicious). At Da-Kine, everything is cooked to order, and marinated in a sauce that renders the meat sweet and tender. A bottle of the same sauce is available to liven up the rice.

A popular way to go is the mixed plate, where you get a couple of meats along with the same sides. Simple, filling, cheap, with most plates priced at $6.99 to $10.99.

Hawaiian local food reflects the diversity of the people there — a mixture of Japanese, Korean, Filipino, Portuguese, Polynesian and American. And that’s what you get at Da-Kine. But no Spam, another idiosyncratic Hawaiian food staple left over from World War II.

Clay acquired his love this food in a roundabout way — through Portland. Unlike Tampa Bay, Portland has a thriving food-truck culture, with more than a few trucks specializing in Hawaiian food.

“There’s a lot of island influence there,” he explains.

When he moved to Tampa two years ago to be closer to family, Clay, 31, soon missed those island flavors. “I love Cuban sandwiches and all, but after a few months I needed some variety,” he recalls.

When he couldn’t persuade a Hawaiian food-truck friend in Portland to set up in Tampa, he settled for his recipes instead. Though he’d never run a restaurant before, Clay bought a trailer in Miami (which has a growing food-truck scene), tricked it out in bright orange, and got a morsel of land from a friend on S Dale Mabry Highway. He set up a couple of picnic tables with umbrellas for those who can’t wait to get home to eat.

After a year, he has drawn a lot of regulars from MacDill Air Force Base who already were familiar with Hawaiian local food and draws customers from as far as Orlando.

For Clay, it’s all about the sauce, his own take on a light teriyaki, which is basically a sweetened soy sauce. The meat is marinated in the sauce for two days and grilled, except for the signature Sweet Shoyu Chicken, which cooks slowly for a few hours. Everything is served in characteristic white foam boxes. The shave ice ($3), doused in tropical syrups, comes in large, daisy-shaped plastic bowls like the ones used in Hawaii.

And put Spam on the menu.

That really would be da kine.