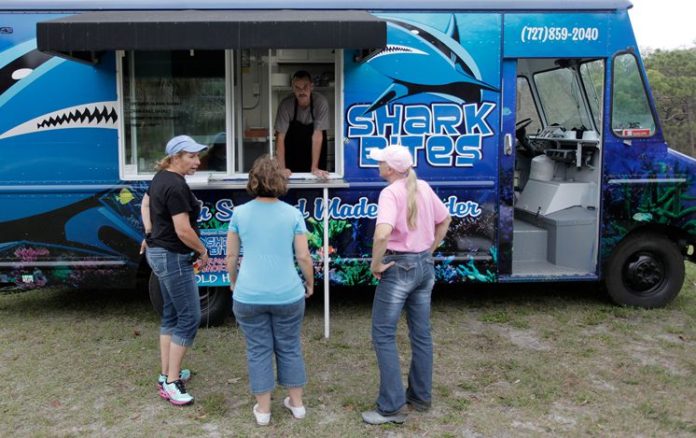 To understand how Chris Mercier ended up serving fresh seafood from a truck covered in blue sharks, you have to know about his skydiving mishap as an elf.

As part of a 2003 charity event in Coleman, a small town 30 miles north of Dade City, Mercier was supposed to parachute in with a bagful of Christmas gifts for children. The moment he jumped from the plane, though, he knew something was wrong.

“I was 100 feet from the ground and looked down to see a group of five or six children right beneath me,” said Mercier, 46. “I knew that the way I was falling, I could hit those kids.”

Arching his body in a desperate twist, Mercier landed in a way that allowed him to miss the children — but he ruptured four discs in his lower back.

“I’ve paid for that decision every day of my life,” he said, “but I’d much rather live with a bad back than to have seen those kids hurt.”

The injury made it difficult for Mercier to continue working with his Top Performance Tree Service in New Port Richey. “If I tried to work one day with the tree service,” he said, “I would spend the next three days in bed and in pain.”

Other health problems caught up with him in recent years, too, including heart issues that required him to get a pacemaker in 2010.

Mercier knew he had to make a change in how he earned a living. So he turned to his first passion: Food.

In January, he began operating Shark Bites, a seafood concession truck that can be seen at special events throughout Pasco County.

“My dad loved to cook, and I always wanted to continue his work. I’ve been cooking since I was 5 years old, and I took a cooking class in school,” said Mercier, who attended Land O’Lakes High. “I was one of the only boys in class, and didn’t mind being surrounded by all those girls,” he added with a laugh.

When he was 18, Mercier was named manager and head chef at Good Times Pizza in Tampa, and he had dreams of some day owning a restaurant. But the cost of such a venture seemed out of reach, so he decided instead to pursue a career in landscaping and T-shirt screening/design.

Through the years, though, Mercier never found himself far from the kitchen; often cooking at home for wife, Rachel, sons Jeremy and Eric, and eventually for their grandchildren.

When he decided last year to pursue a culinary career, seafood was the obvious choice for this avid fisherman.

“Whatever I made, I wanted it to be fresh, and the variety of seafood in this state is amazing,” Mercier said. “Plus, by selling seafood, I support the local area.”

From the counter of his Shark Bites truck, Mercier sells fresh shrimp, grouper and other seafood treats, as well as extras ranging from fries to funnel cakes. He will be at a Civil War re-enactment scheduled for today at Fair Haven Farms in Land O’Lakes, as well as the Cotee River Blues and Seafood Festival next weekend in New Port Richey.

He also provides concessions at cancer awareness events sponsored by the Lutz-Land O’Lakes Women’s Club, and plans to run the truck at several Relay for Life events. Earlier this month, he served guest riders at Fair Haven Farms for the Ride for Hospice, an annual event that last year raised $19,000 for Gulfside Regional Hospice. Mercier gave 10 percent of his sales from that event to Gulfside, which had cared for his father during a 2001 battle with cancer.