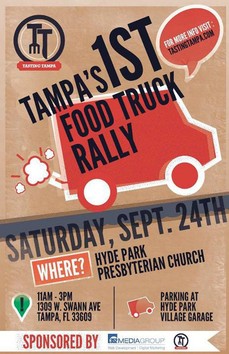 By JEFF HOUCK | The Tampa Tribune

TAMPA — A culinary trend that has rolled through cities across the country finally makes a stop here this weekend.

Tampa’s first Food Truck Rally will take place from 11 a.m. to 3 p.m. Saturday at Hyde Park Presbyterian Church at 1309 Swann Avenue. At least 10 food vendors from throughout the Tampa Bay area are scheduled to serve such fare as devil crab, Mexican food and cupcakes.

Todd Sturtz, author of the new food blog Tasting Tampa, organized the rally after visiting a food truck event in Orlando this year that attracted thousands of hungry customers. In Miami, the food truck scene has exploded to include about 100 different vendors.

Hyde Park Presbyterian, where Sturtz is a member, was interested in attracting more people to the church with a food-themed event. The church had the room to accommodate the event, so Sturtz pitched the idea of a rally and then approached each food truck about participating.

“Since I’m the resident foodie at church, they always come to me for cooking and barbecues,” he said.

Food trucks appeal to those who enjoy something other than boring, mass-produced food, Sturtz said. The rally in Orlando was more-family centric than he expected.

“It’s more individual, unique gourmet food that you’re getting off these trucks,” he said. “It’s a good, cheap evening with a different thing to eat every time. This is not the roach-coach food of the ’80s.”

Compared to cities such as New York, Los Angeles and San Francisco, where the mobile food scene first hit years ago, Tampa is a bit behind. But Orlando’s food truck culture has rubbed off on Tampa, Sturtz said, and TV shows like Food Network’s “Great Food Truck Race” are stoking interest.

Some of the vendors scheduled to attend and the food they plan to sell include:

Wicked ‘Wiches: Exotic sandwiches, such as a cheeseburger eggroll and a Krispy Kreme egg sandwich with Irish cheddar cheese and ham

“They also have duck confit on a rice puff with slaw that’s amazing,” he said.

No admission is charged to attend the rally. Many food items at each truck sell for between $4 and $6, but some may cost more. Parking is available at the Hyde Park Village Garage.

For information, go to TastingTampa.com.