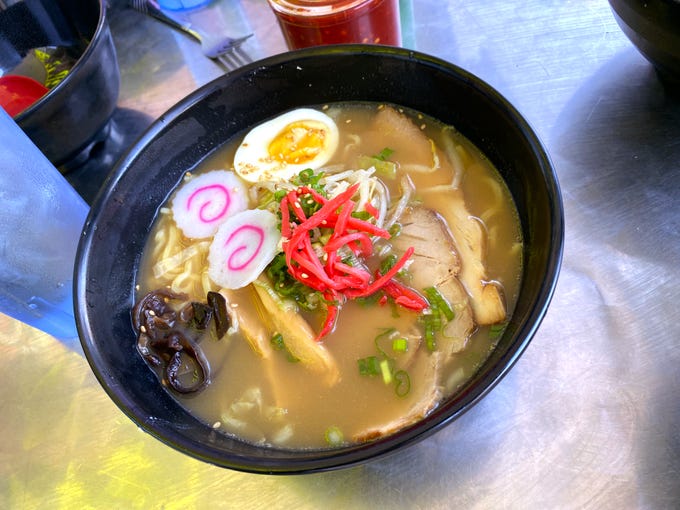 Yatai Ramen may have temporarily parked its yatai (Japanese for “shop stand”) but its plucky spirit now lives on in more permanent fashion.

Since 2014, Mark and Judy Kondo have operated the popular food truck, named for yatai — Japan’s tiny, late night ramen street carts that are handed down from generation to generation. And while a food truck might be a gas-guzzling behemoth compared to Japan’s traditional wooden yatai, a mobile kitchen is still a tricky space to work with, particularly when your signature dish involves pork broth that’s simmered for 20 hours.

The Kondos have long sought a brick and mortar space, and in late August, they finally claimed one.

Yatai Ramen’s new kitchen on University Drive in Tempe — just a short longboard ride from ASU — is a huge upgrade from the truck. And while the Kondos still plan to roll out the truck for festivals and weekend occasions, they now boast a humble, permanent little family-run restaurant to call home.

A modest, casual space near ASU in Tempe

Yatai Ramen is a modest but cheery space, surrounding three rows of counter seats and a couple of tiny tables with colorful tile, Japanese pop art and a sakura-clad screen. Groups of friends spill out onto the sidewalk, where a few more tables sit far enough from the road to make them perfectly comfortable.

This is a casual operation, where you grab a drink from the counter, place an order and snag any seat that’s available. The food comes out at a brisk clip, and those who’ve visited the Kondos’ truck will know exactly what to expect.

Ramen is the thing, and in addition to an off-menu vegan broth, Yatai offers three primary varieties, all based on the 20-hour pork stock.

The signature Yatai ramen is a tonkotsu base with a “secret” tare, fragrant and a little sweet, milky and rich with some nice body, bearing skinny noodles with a solid bite. Slabs of pork belly chashu are joined by classic companions like menma, slivered wood ear mushrooms, pickled ginger and a tender egg that’s set but still deep golden at its core. This isn’t the porky arms race of trendy tonkotsu joints, but a humble, unassuming bowl with next door character.

A Sapporo-style miso ramen gets the requisite kick of fermented, umami funk and a smattering of corn, along with a thicker, nubby noodle.