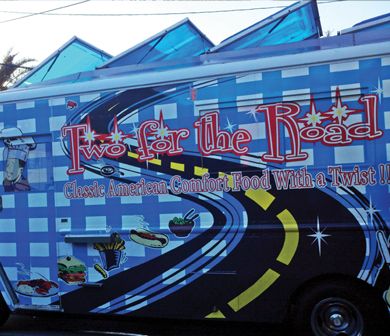 As a newbie to the food truck scene, Two for the Road has been roaming San Diego’s streets since March. Their American comfort food classics infused with local flavors are rapidly gaining popularity on some social media sites.

The owners, Roberto Luciani and Lisa Orchow, are a husband and wife team who grew tired of working for other people. Like most food truck entrepreneurs, Orchow explained how starting a restaurant was out of the question due to a lack of funds, and not to mention, very risky. A food truck certainly made the idea of working for themselves much more affordable.

Their diverse backgrounds influence their “traveling restaurant” concept. Before they met, Luciani, a native of Fermo, Italy, was attending culinary school in his home country while Orchow was working in the travel industry. Years ago, their paths crossed when they both worked at the Las Vegas W Hotel. Luciani was the Executive Chef at the hotel’s Italian restaurant and Orchow was the concierge.

About a year ago, they relocated to San Diego with their son Austin, who recently graduated from high school and works alongside his parents. “The 20 some years I spent in the travel industry allowed me to travel all over the country and the world,” Orchow said. “When I did so, I loved eating at little local places, and I wanted to recreate some of my favorites from around the country.”

Orchow explained that they would have loved to focus on an Italian concept, but for it to live up to Luciani’s expectations, they would have needed an oven and their truck does not even have a freezer. Every ingredient, from the potatoes they cut each morning to their lobster, is fresh and purchased locally.

“It is a lot of work,” Orchow said with a laugh. “We make several grocery store stops throughout the day and when the day is over, we are back at the store preparing for the next day. But it’s a lot of fun.”

The Food
The Two for the Road menu changes weekly. They always feature certain items like a burger with a Two for the Road twist. When my dining companion and I had the pleasure of trying their menu, the burger of the week was the Brooklyn Burger. Served on a grilled brioche bun, this ½ lb burger featured a bed of spicy slaw and was topped with hot pastrami and melted Swiss cheese.

Orchow said they often sell out of their most popular menu item, the New England Lobster Roll. The chunky Maine lobster is served Cape Cod style with chopped celery, fresh lemon juice, and a light dressing of mayo. Their second most popular items are the Captain Crunch Crab Cakes.

Although there were less than 10 menu items, it was difficult to decide. We ordered a Mexicali Corn Dog with spicy mustard, the Miami Mojito Chicken Sandwich, and an order of Parmesan Fries. The service was quick and all of our items were fantastic.

Served on a cardboard tray lined with blue checkered tissue paper, the corn dog featured a Hebrew National dog with bits of chopped jalapeños in the breading. It had the right amount of spice and was quickly gobbled up.

The Mojito Chicken was served on a grilled, but soft, brioche bun. The marinated chicken was a little bit dry, but the generous portion of caramelized onions and mint/lime mayo added enough flavor to make it a delicious sandwich.

Of course, anytime you have fresh cut french fries, it is always a treat. Top them with parmesan cheese and the right amount of salt and you end up with a side that is anything but common. Overall, our dining experience at Two for the Road was filling, good, and very affordable. We spent less than $15.

Although Two for the Road features a selection of unique and retro sodas, like the Dublin Dr. Pepper normally found in Texas, they were parked outside of a bar, so we elected to have a beer. However, the beverage options are as unique as the sides, like the Route 11 potato chips imported from Virginia and the Cravory cookies featuring flavors like pancakes and bacon.

I have to agree with Orchow, Two for the Road is a nice alternative to regular fast food and you get to try things you normally do not find anywhere else. To find this food truck, follow them on Facebook or Twitter @TwofortheRoadSD. And make sure to follow our newest column, “The Food Truck Chronicles,” only at nugmag.com with even more delicious San Diego food truck discoveries to come.