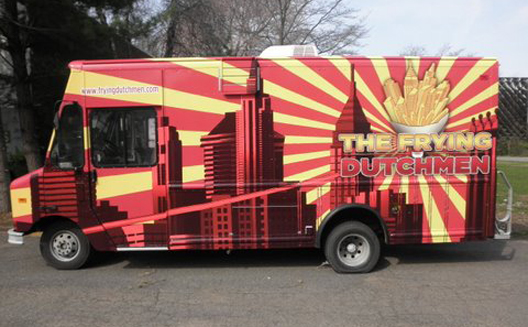 Young entrepreneurs Ben Goldberg and Jacob Davenport have joined the legions of New York City mobile restaurateurs with their own gourmet food truck: The Frying Dutchmen.

You probably remember the scene from Pulp Fiction in which Jules describes his trip to Amsterdam, telling Vincent how the Dutch love to smother their fries in mayo (odd, but indeed a fact).

NYU grad Ben Goldberg is banking on the same concept, which he discovered himself while traveling in Europe in 2009.  Belgian fries are not only the single most popular food in Amsterdam, but the Dutch enjoy fries as a meal, not solely as a side dish. Upon his return to the States, Goldberg decided that with the right chef he could change American’s minds about fries and serve them as a main course in the Big Apple.

So what will set the two aspiring young restaurateurs apart from the plethora of food carts and trucks already available in Manhattan?

“The benefits of being an entrepreneur at such a young age is that it’s a great time to get a business started- harnessing technology to our favor and being really creative,” said Goldberg. The company’s site features a Truck Tracker Widget that allows customers to find the truck’s location live via Google maps.

The same tracker widget can be found on the truck’s Facebook page and on the mobile site, as well as the Twitter stream. Goldberg also explained an online and mobile pre-order system. “[Customers] pick up the order without having to wait on line during time constraints or bad weather.”

Food trucks and food carts have been an excellent way for restaurateurs in New York to start a business when they don’t yet have the capital to open a brick-and-mortar restaurant. The owners of the Frying Dutchmen agree, adding, “A food truck allows you to build a following that will eventually go to your retail location – rather than having to hope your place gets popular, when you can’t move.”

Goldberg left TNGG with some advice for other young entrepreneurs who want to strike out on their own. “If you have a good idea, spend every minute you can on it, and the more and more you believe in it, the less you will care if people tell you that you will fail. It’s important to listen and trust yourself and go after what you want. The biggest advocate is always yourself and you need to remember that.”

Be sure to check out The Frying Dutchmen during your next visit to New York City, by tracking its location through Twitter: @Frying_Dutchmen.