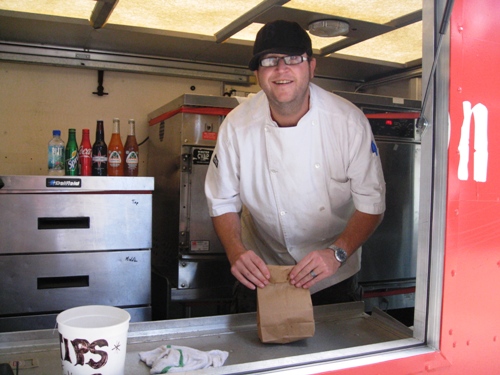 It’s midday on a cold November day in the Loop and there’s an endless line leading to a truck.

It’s a lunch line, leading patrons to the front of the Gaztro-Wagon (gaztro-wagon.com), a food truck dedicated to bringing Chicago unique lunch and dinner dishes as they work and live in the city.

“It’s a pretty good price set and I’m supporting local business,” South Loop resident Paul Rous said, waiting for his turn to grab lunch from the truck. “[My favorite thing is] plantain chips, because I get something different on the sandwich-front every time.”

When Matt Maroni parted ways with his last restaurant position at the Mid-America Club in 2009, he knew that it was time to start a new chapter in his professional life. Originally from Houston, Texas, he has worked in the restaurant industry for more than 15 years.

He moved to Chicago in 2007 and noticed that the city was lacking a food trend he’d seen in other large cities such as New York, San Francisco, Pittsburgh and even Portland –- the Food Truck Movement.

“So I put pen to paper and wrote basically a thesis on how [food trucks] could benefit the city and the for and against arguments … and actually drafted a city ordinance,” said Maroni.

He then approached Aldermen Vi Daley (43rd ward) and Scott Waguespack (32nd ward), who have both been instrumental in initiating the change to Chicago’s current laws that prohibit preparing food on the trucks themselves.

“Matt did a ton of up front work, brought the work to us and we started the process of making it fit with the codes for health and licensing,” Ald. Waguespack said.

“The only issues we were going to face were the hurdles thrown up by the Daley Administration and some people in the Illinois Restaurant Association,” Waguespack said. “They were and still are, the only ones opposing the reality of the trucks for various reasons, despite the fact they are proven to work in so many other places….except Chicago.”

“There’s such a small window of time that I can serve the food, only an hour to an hour and a half,” Maroni said, adding that it’s usually less than that because he sells out almost every day.

He makes about 300 “naanwhiches” a day, sandwiches that use Indian Naan instead of bread to keep them from getting soggy before heading out in the city in the Gaztro-Wagon, a converted ice cream truck.

As one of the Food Truck Movement pioneers, Maroni said he had to do a lot of research in figuring out the best spots around town and sees other Trucks following his every step – maybe a little too closely.

“I’m a fan of all [the other food trucks],” he said. “They’re competition, but I keep tabs on them, too, and I know, being the first one out, they follow our schedule and sometimes they drop down next to me and … it’s all fair game in love and war.”

Since he launched the Gaztro-Wagon last summer, 10 other trucks have emerged. There are several cupcake wagons, a meatballs wagon, and other sandwich trucks.

Maroni realizes one of the keys of his success is the use of social media in connecting with Gaztro-Wagon customers, but added that it’s more than just 140-character Tweets and Facebook status updates that get people excited and entice them to come back. (Twitter.com/wherezthewagon)

“I’ve done zero advertising,” Maroni said. “It’s social media driven to a T, but you have to have a personality behind it. We’re a little outlandish and we don’t play by anyone else’s rules, so I can cuss when I want to and bullshit with people and it’s totally personable.”

His staff is also an important part of the Gaztro-Wagon. Because he takes the truck out to locations for lunch and dinner, he has to ensure that service at his storefront in Edgewater is quality even while he is away. He relies on a staff of eight and said he hires based on attitude.
Maroni fills the “naanwhiches” with slow-cooked ingredients like wild boar belly with fennel, olives, yogurt and shaved red onions and pork shoulder with radish, cilantro and queso fresco.

“Being in the business so long, I can write stuff down and I know what goes together,” Maroni said. “I have a library in my head that I go back to I know what flavors and textures and profiles go well together.”

Maroni said there’s more to come. He is currently waiting for the Chicago City Council to pass the proposed ordinance he contributed to and to allow him and all other food truck vendors to cook and prepare food on the trucks. Although Maroni said he gets frustrated by not being able to make his creations on the truck, he understands why the city has concerns.

“At the end of the day you’re dealing with public safety,” Maroni said. “If you have people out there that are handling food improperly you can get a lot of people sick, really quick, so it really boils down to that idea. You’ve got to make sure that standards are set from the get-go.”

View The Gaztro-Wagon in a larger map