For some, it may even be a live album released in 1976 by Elton John, while for others, the name of a much more recently released 2009 movie, directed by Darko Lungulov.

To PNW foodies, however, it means something else: where you can find a member of the ever growing in popularity in the PNW food truck phenomenon by the same name: the Here and There Grill is a food truck that was founded in March of 2009 in Edmonds, Washington by entrepreneur and chronic cook Julie Malcom (incidentally the daughter of one of the creators of SpaghettiOs, yet another phenomenon of the Campbell’s Soup Company).

Julie grew up in her family’s Edmonds’ restaurant, the Harbor House Restaurant. She obtained a degree in Business Administration, then worked in food business management from Denny’s to the Washington Athletic Club, to Arnie’s in  Edmonds; from 1997 until she sold it in 2001, she ran her own restaurant in West Seattle, called the Cat’s Eye Café (now closed). She owns over 500 cookbooks. During her hiatus from restaurant life, Julie focused on raising her kids and organizing local events in Edmonds, which led her to turning a one-burner hot dog stand into a full kitchen for the Pacific Little League – a restaurantesque renovation that inspired the Here and There (Mobile) Grill.

Julie’s refurbished food truck – which she touts as both “an anywhere grill” and  “a gourmet lunch spot on wheels” – is open four days a week from 11:00 a.m. to 2:00 p.m. and can be found in Redmond (Tuesdays), Edmonds (Wednesdays), South Everett (Thursdays), as well as either Northgate or Seattle Center (Fridays). Your Hedonista was recently invited to sample Julie’s wares for review by way of a media event at the truck next to the International Fountain at Seattle Center.

The menu items – chock full of the usual soups, salads, ‘n’ sammies, in hungry man-sized portions – change weekly; by far the best-smelling item on the menu was the steak sandwich ($9.95). The pea and basil soup (cup $3.50, bowl $4.5o) tasted like garden-fresh spring peas, complete with a garnish of fresh mozza and red peppers. The chicken avocado salad ($8.95) – complete with Gorgonzola crumbles, bacon, red  onion, pepitas, and cilantro – was ridiculously a tad heavy on the romaine lettuce, but the lime-jalapeño dressing was absolutely de-lish. And the rockfish po’ boy was chocked-full of cornmeal breaded rockfish, spicy slaw and pickles and thus difficult (and messy) to hold. In short, the portions are ridiculously huge, so come hungry, dear hedonists.

Some of the offerings to be found (at) Here and There (left to right): steak sandwich with fries, chicken avocado sandwich, and the rockfish po’ boy with edamame salad.

But the comfort foodiest treat by far were Julie’s Salted Brown Butter Rice Krispies Treats – all they needed to taste like salted caramel chocolates was, well … the chocolate … c which you could add into the recipe yourself with the addition of a chocolate drizzle or chocolate chips; the recipe can be found immediately below, care of Julie, and just in time for the holidays:

Prepare a 13-by-9-by-2-inch baking dish by rubbing 2 tablespoons of butter on the inside. Melt the remaining two sticks of butter in a pan over medium heat, stirring and watching carefully. Once it turns brown, but before it burns, take the pan off the heat and add marshmallows. Stir the marshmallows until they melt. Add the Rice Krispies and sea salt. Immediately turn into prepared pan and press out with buttered hands or a piece of wax paper. Cool and cut.

So find Julie rollin’ throughout Western Washington, if you can … she’s here and there (and near)  in her anywhere grill. 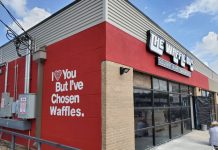