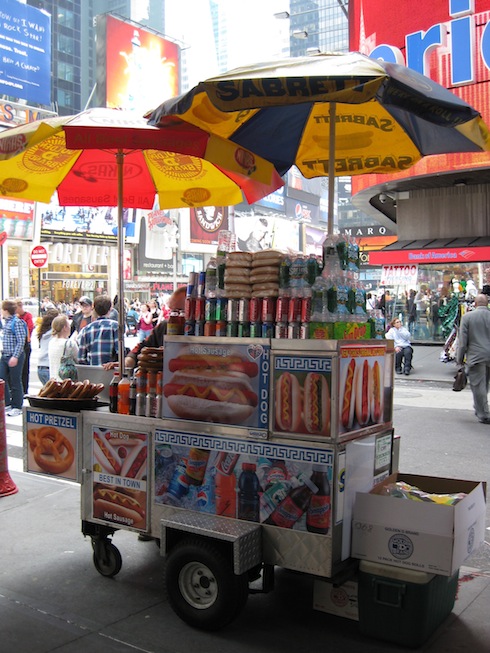 New York City – haven of glitz, glam, and… street vending! Mobile vending in New York City has a rich history. Did you know that Macy’s and Bloomingdales were founded by mobile door-to-door peddlers who banded together to sell their goods? Food vending has always provided fast and delicious food to New Yorkers, even before it was called New York. Pushchart vendors have been regulated since 1691, when the city was known as New Amsterdam!

There has always been a strained relationship between mobile food vendors and the law, but for many years in New York History, the usual restrictions didn’t apply in immigrant neighborhoods where many vendors did their business. Then, as today, many of the vendors themselves were immigrants, in fact. Italian families purchased goods such as marinated olives, cheese, and produce. Jewish families bought fish. Prepared foods historically vended on the streets of the city include knishes, pickles, arbis (hot chickpeas), chestnuts and ice cream. Many of these foods are still standards of New York vendors!

Since mobile food vending does not fit into the usual property-based business model, law-makers have always had trouble categorizing them and creating appropriate laws. In the 1930s, mobile vending was outlawed altogether in order to coral the vendors into indoor marketplaces (this law did not last long).

Even though as many as 25,000 vendors originally roamed the streets, recent laws has capped the number of year-round mobile food vendors to 3,000. There are some main categories of mobile food vendors: fruit vendors (known as Greencarts), coffee carts, Halal food carts that sell Middle Eastern food, hot dog vendors, ice cream vendors, and the new wave of trendy, cuisine-based vendors. Stay tuned for what the real differences between these vendors are!