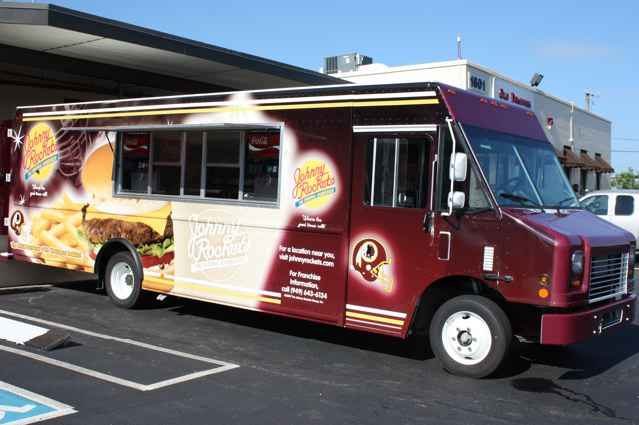 Just when the streets are becoming so overcrowded with mobile munchies that senior citizens start throwing blows, The L.A. Times readies us for another invasion of corporate food trucks. Leblon Cachaca kicked this trend-takeover off in March, while the fake North Korean taco truck advertising an EA video game and one for the movie Machete were sadly not the last. Nope, another nadir is apparently being sought, as Sizzler, yes that Sizzler, is rolling out its own food truck in L.A. Fatburger is also getting in on the action, with a reported seven trucks on order. And maybe because the state has legislated anyone who can make a decent taco into hiding, Subway will start a fleet of sandwich trucks in Arizona. Unfortunately, these are just the beginning of the shark jump to come.

Aaron Noveshen, co-founder of food truck aggregator Mobi Munch and co-owner of San Francisco’s Pacific Catch, predicts, “Ten percent of the top 200 chains will have trucks on the road within the next 24 months.” Potentially launching on four wheels will be efforts from Shakey’s Pizza, the Habit, Poquito Mas, Johnny Rockets, and Koo Koo Roo. Scary indeed, but don’t say we didn’t warn you.

Of course, it’s clear to just about anyone with a tongue why the big name chains are missing the point of this craze. Kerry Kramp, Sizzler’s CEO, says he was inspired to start branded food trucks after seeing people wait 45 minutes on Abbot Kinney for a food truck meal and thought, “These people should be going to Sizzler.”

Sorry Kramp, people will wait 45 minutes for Kogi and the innovation that comes from Roy Choi’s imagination, but the last, eternally empty Sizzler and Koo Koo Roo we remember on our streets, closed months ago. If people won’t travel to your numerous fixed locations, you can probably forget about them seeking your barbecued beef anywhere between Venice and Downtown. Besides, aren’t you guys supposed to be all over our pop-up trend now?